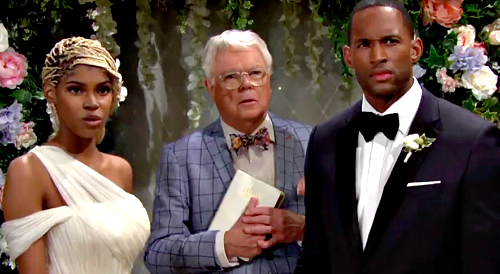 B&B spoilers reveal that Quinn is devastated that Carter is going to marry Paris. It’s clear that Carter is in love with Quinn and has two reasons for marrying Paris. One is so he doesn’t have to be alone anymore.

Carter has always made it clear that he wanted a life partner and to start a family.

The other reason for Carter’s quickie wedding is to stop Paris from interfering in Quinn and Eric’s marriage.

Despite Carter resenting “Queric,” he also loves Quinn so much that he doesn’t want anyone wrecking her marriage. Quinn’s happiness means that much to him, even if it is with another man.

Once Quinn and Bridget Forrester (Ashley Jones) catch Eric and Donna in the act, there will be more drama.

Of course, Quinn will be furious that all this time she was the only one working on getting her marriage back on track. It’s true that Quinn betrayed Eric first.

However, Quinn truly believed that they were going to overcome the obstacles.

Once Quinn realizes that she has lost both Eric and Carter, she will feel lost.

That is when Eric has a heart-to-heart with Quinn and pushes her to stop Carter’s wedding before it’s too late.

The Bold and the Beautiful spoilers reveal that the weekly preview shows Quinn racing to get to Carter and Paris’ wedding.

Quinn finds a bicycle and hops on it, pedaling like crazy. It is teased that Quinn’s bike race to the wedding will have some comedic scenes.

The Bold and the Beautiful Spoilers: Paris Buckingham Objects

As Charlie Webber (Dick Christie) officiates the wedding, Quinn bursts into the ceremony. Disheveled and sweaty from her bike race, which includes a fall, Quinn anxiously tries to figure out if she’s too late.

Carter turns from his bride and is shocked to see Quinn standing there. Quinn is apologetic to Paris despite their history but can’t keep her feelings hidden any longer.

That is when Quinn makes her emotional and heartfelt speech.

Don’t expect Paris to quietly step aside, though. Paris demands that Carter get rid of Quinn so they can finish the ceremony.

Even though Carter might feel torn as he doesn’t want to hurt Paris, will he choose Quinn, or could this story have one more twist?