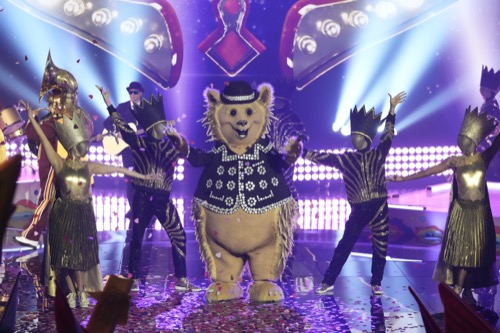 The winner from each of the three rounds will compete head-to-head in the Season Seven finale. Only one will take home the trophy: will it be a singer from Team Good, Team Bad, or Team Cuddly?”

It’s the season 8 premier of the Masked Singer featuring a round up of 26 new celebrities set to perform. Nick Cannon welcomes back the panel; Jenny, Robin, Ken and Nicole.

The Harp is up first. She comes to the stage to share her story of being rejected as a performer at a young age. Now she is back and ready to take back her life. She sings a Pink song. The panel loves her performance. She discusses her awards in comedy, singing and acting after while talking with Nick. The panel thinks this could be Jennifer Hudson, Fantasia, or maybe Queen Latifah.

The Hedgehog is welcomed to the stage. He sings Love Me Too. The panel sings and dances with him. He gets some help from a back-up band. After his performance, the Hedgehog shares that he has previously won a Tony and a Grammy. Ken thinks this is Elton John, Robin thinks Eric Idle or maybe John Cleese.

The Hummingbird takes the stage with some cologne wings. The Hummingbird shares his involvement in sports, the Super Bowl and more. After he sings, Robin commends him for hitting all the notes. Another clue is shared – he has won some awards in football. The panel thinks maybe Payton Manning, Tom Brady or Deon Sanders.

A Knight comes to the stages, riding what looks like a golden goose. After he sings Putting on the Ritz, the panel gets some clues as the Knight jokes around with Nick on stage. The Knight shares that he cherishes the big and small awards. He loves them all. The panel thinks maybe David Hasselhoff.

Its now time for the audience to decide to vote for their favor performer out of the four celebrities tonight. The show takes a break while voting gets underway. Nick returns to the stage and announces the first singer set to go home. Its the…..Knight.

Its time for the Knight to show who he really is. The crowd chants “take it off.” It is William Shatner!! The audience and panel go wild. Robin remembers him as an old friend of his father’s. They are all thrilled to see him on their little show.

Next to be unmasked is the Hedgehog. The panel still thinks this is Bill Nigh, Elton John, Eric Idle, or maybe John Cleese. The crowd chants “take it off.”. The performer is….Eric Idle. Robin is thrilled he was right! Eric sings one more song to end the night.