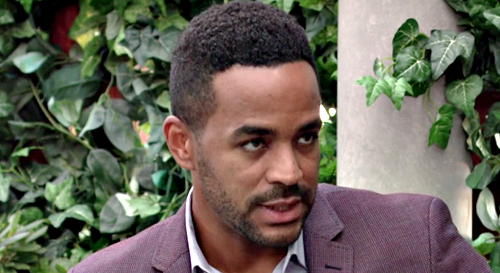 The Young and the Restless (Y&R) spoilers tease that Elena Dawson (Brytni Sarpy) may threaten to leak Nate Hastings’ (Sean Dominic) twisted plan. Will Elena warn Nate to call off his Devon Hamilton (Bryton James) trap or else she’ll spill the truth herself?

Nate may ultimately find himself wishing he’d kept the details of his scheme under wraps.

Although Nate surprisingly didn’t reveal anything significant to Imani Benedict (temporarily played by Denise Boutte), he shared all his sinister steps with Elena.

Of course, that led to Elena immediately sounding the alarm.

Elena doesn’t like the idea of Nate compromising his integrity for a plot like this, especially one that could have such far-reaching consequences and do so much damage to his family relationships.

Nevertheless, Nate is standing his ground so far and will leave Elena growing increasingly concerned during the week of September 26-30.

We’ll see Nate overstep some boundary and potentially rile Elena up in the process.

The fact that Nate will be lying to Devon, Lily Winters (Christel Khalil) and Billy Abbott (Jason Thompson) while feeding inside info to Victoria Newman (Amelia Heinle) won’t go over well with Elena.

Since the goal is for Victoria to become a majority shareholder and grant Nate the CEO spot at Chancellor-Winters, Elena will continue to see the potential for disaster and feel like it’s downright wrong.

It looks like Elena will eventually put her foot down since Y&R spoilers say she’ll deliver an ultimatum.

Elena may decide she can’t stand by and watch Nate do something like this – not knowing what she knows.

This puts Elena in a tight spot since she’s complicit in the whole thing if she keeps her mouth shut.

Nate is walking a dangerous line when it comes to the legalities of this hostile takeover of Chancellor-Winters, but it’s bigger than that.

Elena considers Devon a friend and certainly won’t want to see him get hurt.

Nate will be hurting himself too in Elena’s eyes, so this may be her way of preventing a massive mistake – or at least trying to.

Will Elena warn Nate to call his trap off or risk having her spill the beans?

Elena may hope she can put a stop to all this, but it may be too late to prevent what’s already in motion!

The Young and the Restless spoilers say Nate and Elena’s relationship will definitely be put to the test soon, so stay tuned.

CDL’s the place to be for exciting Young and the Restless spoilers, updates and news, so make us your top source.