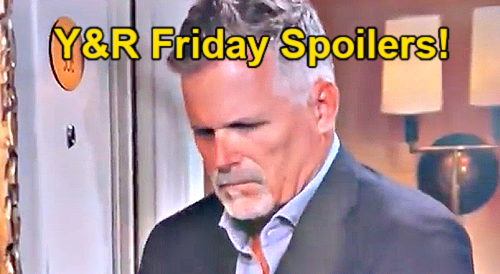 Even though everyone believes Victoria is starting a new life with Ashland, she actually has something very different in mind. Victoria thinks her plan is going perfectly.

On Friday, July 1, expect Victoria to continue with the next step of her plan to take down Ashland. However, Victoria will face an unexpected complication.

Ashland went to take care of the $250 million deposit into the corporate account to match Victoria’s funding. Ashland returns much earlier than expected.

Ashland might even be accepting this risk hoping it proves how much he loves her. In any case, Ashland was giving Victoria hints that he might suspect something.

Ashland truly wants to believe this new beginning can work with Victoria. So, Ashland telling her that they can go slow and that he isn’t going to betray her wasn’t just talk.

It seems Ashland was trying to put seeds of doubt in Victoria’s mind, just as he always has before.

In the end, Victoria went through with her plan after a moment of doubt.

What Victoria wasn’t expecting was for Ashland to walk in the door. It is teased that Ashland makes a shocking discovery.

The Young and the Restless spoilers reveal that Sally Spectra (Courtney Hope) planted some seeds in Chloe’s mind.

Then, Sally suggested to Adam that they bring Chloe to the company. Adam doesn’t think it’s a good idea but he’s not aware that Sally has already made it possible.

Even though Chloe told Sally she would continue supporting Chelsea, she gets fed up.

On Friday, July 1, Chloe will explode at Chelsea and tell her the partnership isn’t working out.

The Young and the Restless Spoilers for Friday, July 1

On Friday, fans can also expect Victor to have a chat with Adam. It is teased that Victor gives Adam another ultimatum.

Even though Adam knows that he’s just a temporary placeholder until Victoria comes back, he plans on proving he’s the better CEO.

So, what exactly is Victoria’s new ultimatum and how will Adam react?

It seems that Adam is really being pushed to his breaking point. Tell us what you think is going to happen next and remember to keep watching the CBS soap.