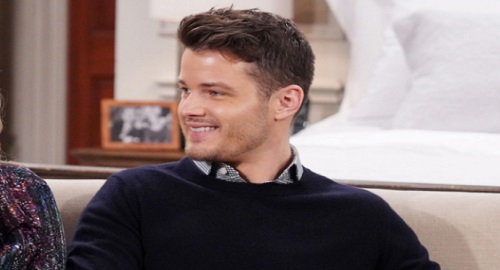 The Young and the Restless (Y&R) spoilers recap for Monday, August 8, reveals that Kyle Abbott (Michael Mealor) will reveal the new rules at Marchetti, so Diane Jenkins (Susan Walters) will lose it over Phyllis Summers’ (Michelle Stafford) job.

At the ranch, Nikki Newman (Melody Thomas Scott) will think it seems like Victor Newman (Eric Braeden) is taking credit every time Ashland Locke (Robert Newman) comes up, but Victor will insist he had nothing to do with his death.

Talk will turn to Adam Newman (Mark Grosman) and how it breaks Victor’s heart to give up on his son being part of the family unity. Nikki will think Victor needs to put that dream behind him for his own sanity.

At Newman Enterprises, Chance Chancellor (Conner Floyd) will mention Ashland’s car being spotted at the gas station near Victoria’s place. After recapping the security footage issues, Chance will admit he walked that half mile to the gas station himself.

Chance will insist he’s on Nick Newman (Joshua Morrow) and Victoria Newman’s (Amelia Heinle) side, but he’ll suspect Victor Newman (Eric Braeden) had the body moved to protect them. If Victoria and Nick know anything else, this will be their chance to come clean.

Victoria will act like everything Chance said is based on speculation. Nick will note that he told Chance everything he knew that night, so Chance will suggest that’s an interesting turn of phrase.

Once Chance leaves, Victoria will rant at Nick for blowing the plausible deniability that Victor offered. Nick will worry since Chance isn’t going to leave this alone – and that means it’ll have major legal implications for all of them.

After Chance shows up at the ranch, he’ll admit he doesn’t think Ashland walked out on his own. Chance will feel certain Victor knows more than he’s letting on, so he’ll suggest it’s time to be straight with him.

Jack will admit he’s happy Diane has made a connection with Harrison. As for whether Diane is a different person now, the jury will still be out – though Jack will seem hopeful.

Summer will try to convince Kyle that maybe they can force their moms to be on their best behavior. Kyle will think there has to be a condition to prevent Phyllis from becoming a liability. Phyllis has to know that if there are any problems, she’ll be out the door.

Unless Phyllis and Diane need to collaborate, they’ll need to stay away from each other. Summer will suggest giving Diane the same warning so that both of them understand there’s a zero-tolerance policy for instability.

At The Grand Phoenix, Diane will gloat to Phyllis about her wonderful new life in Genoa City. After Kyle texts to meet, Diane will play up how she hates to leave Phyllis all alone.

Phyllis will hint that she’s got a feeling something’s about to change – something spectacular. Once Summer texts with a proposition, Phyllis will mention it to Diane before she goes.

Next on Monday’s Y&R episode, Summer will offer to let Phyllis oversee the launch of Marchetti home, their new home décor and furnishings line. Phyllis will also learn she’ll have to obey the rules and play nice with Diane.

Phyllis will ultimately assure Summer that she won’t let her down, so she’ll accept the offer. However, Phyllis will seem a bit on edge when she hugs Summer in celebration.

Back at Society, Diane will choke on her drink when Kyle reveals that Phyllis is coming to work at Marchetti. The news will leave Diane accusing Phyllis of sabotage, so she’ll push Kyle to see her rival’s ulterior motives.

Kyle will argue that even if Phyllis does have an agenda, she can only mess things up for Diane if she lets her. It’ll become clear to Diane that Kyle won’t allow any fighting and that there’ll be consequences if she can’t be civil.

Diane will flip out as she worries this is some kind of test, but Kyle will suggest she should make up her mind that she’ll pass.

At The Grand Phoenix again, Phyllis will give Nikki updates on her new job – though she’ll warn that Summer will be watching her every move. Even so, Phyllis will be committed to burying Diane and getting “this bitch” out of town.

Once Kyle reconvenes with Summer, they’ll talk about how things went with their mothers. Kyle will confess that Diane had a bad reaction, but he’ll try to stay optimistic about the new arrangement.

At Crimson Lights, Diane will blow past Jack as she fumes. Jack will pipe up so that Diane notices him, so she’ll admit Phyllis is going to be her coworker.

Diane will rant about this being a calculated plot, but Jack will urge her not to let her insecurities get in the way. After Diane thinks for a moment, she’ll promise she won’t let that happen.