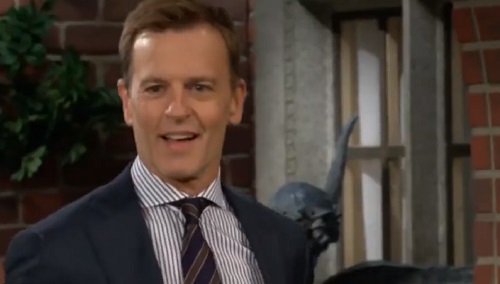 In Tucker’s suite, he’ll talk about the countdown beginning as he gets dressed. Tucker will call someone to pick him up as he prepares for his grand entrance.

At the Abbott estate, Summer and Kyle will speak from their hearts before Nick Newman (Joshua Morrow), Phyllis Summers (Michelle Stafford), Jack Abbott (Peter Bergman) and Diane make their own sweet speeches.

After Kyle and Summer promise to maintain their vows, they’ll be pronounced husband and wife again. Right as Summer and Kyle kiss, a helicopter will create a commotion as it lands nearby.

Once Tucker appears, he’ll act like it was more efficient to come say hello to everyone in one fell swoop. Jack will rant about Tucker crashing a family gathering after disappearing for years and will warn that he’s not welcome.

Diane will play dumb and act like it’s ridiculous for Tucker to insert himself into the situation like this. Tucker will eventually whistle like he’s just seeing Diane for the first time since she came back from the dead and will suggest she looks good.

Jack will push Tucker to back off and will assume he’s there to see Ashley, who’s stuck in Paris. After Jack tries to throw Tucker off the property, Tucker will promise not to impose for long.

However, Tucker will want to give Kyle and Summer a gift on their special day. Once Tucker reveals that it’s a vintage Bentley, Nikki will seem taken aback considering what Deacon Sharpe (Sean Kanan) told her about Diane.

Kyle and Summer will refuse to accept the car, but Tucker will push until Kyle finally takes the key. After Tucker reveals that he’ll be sticking around Genoa City, he’ll speak with Jack privately about when Ashley will be back.

Although Tucker will want to make amends, Jack won’t think Ashley’s going to listen and will make sure Tucker heads on his way. That’ll leave the party guests to talk about Tucker being Devon Hamilton’s (Bryton James) biological father and speculate about why he’s back in town.

Back with Jack, he’ll question Nikki about her LA trip and learn it was about a gown for Summer. Nikki will act like Jack’s interest in her trip is an indicator that he doesn’t trust Diane’s story.

Once Nikki saunters off, Diane will find Jack and act outraged over Tucker crashing the party. Jack will acknowledge that Tucker was asking about Ashley, but he’ll think there’s more going on.

Over with Victoria Newman (Amelia Heinle) and Nick Newman (Joshua Morrow), they’ll consider the intriguing timing since Tucker is back right as Chancellor-Winters is about to go public.

Nick will acknowledge there could be lots of reasons for Tucker’s return, but Victoria will think they need to warn Victor Newman (Eric Braeden) regardless.

As for Nikki, she’ll reconvene with Phyllis and mention that Deacon tipped her off to Diane being driven around in a Bentley. That’ll raise suspicions and seem like more than a coincidence now that Tucker just offered a Bentley to Kyle and Summer.

Even so, Phyllis will suggest that Diane and Tucker seemed genuinely surprised to see each other. Nikki and Phyllis will realize they’re close to a secret, so they’ll want to keep digging.

In Tucker’s suite again, he’ll text Diane to point out that her secret is safe. Tucker will contend that all Diane has to do now is let him know the minute Ashley is back.

As Diane checks that message, Phyllis will notice she seems engrossed in something on her phone. Diane will downplay it and excuse herself to mingle, so Phyllis and Nikki will raise a glass to each other as they continue to scheme.

In the park, Chelsea Lawson (Melissa Claire Egan) will check a text and see that Adam Newman (Mark Grossman) is stuck in a meeting. Since this is important, Chelsea will move ahead with her Connor Newman (Judah Mackey) conversation.

After Chelsea admits she was pregnant before she had Connor, she’ll add that she was overwhelmed and not ready to take care of a baby. Chelsea will talk about making a big decision and making sure he was raised in a loving home.

Once Chelsea reveals that Johnny Abbott (Paxton Mishkind) was the little boy she gave up, she’ll note that he’s Connor’s half-brother. Chelsea will hope this can bring them all closer as a family, but Connor will have all kinds of angry questions and won’t understand why he’s just now hearing about this.

After Connor says he doesn’t want to talk about this anymore, he’ll demand that Chelsea take him back to the ranch. Connor will run away from the bench they’re sitting on and leave Chelsea distraught.

Later, Chelsea will make a teary phone call to Billy Abbott (Jason Thompson), who’ll agree to come talk to her at Crimson Lights. Billy will find out Connor flipped out over the news about Johnny, so he’ll think maybe Chelsea needs to slow down and stop letting emotions drive her decisions.

Billy will also suggest bringing a child psychologist or adoption specialist into this, so Chelsea will wish she’d done that before.

Although Chelsea will feel like she’s wrecked her relationship with both boys, Billy will think they have big hearts and just need time to process. Billy will also have an idea of how to make Chelsea feel better, so he’ll take her to The Grand Phoenix rooftop.

Once Billy explains how Chelsea needs catharsis and a chance to take control, he’ll scream and invite her to join in. Chelsea will let out a scream of her own and will look like she feels better after the release.