The Young and the Restless Spoilers: Victoria Betrays Ashland With Long Con – Locke Heartbroken & Out $250 Million 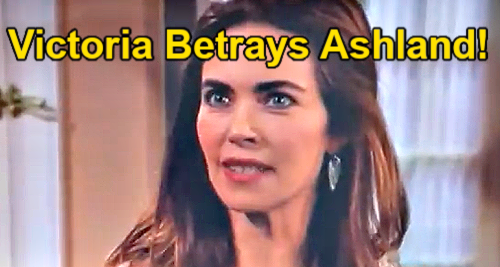 The Young and the Restless (Y&R) spoilers tease that Victoria Newman’s (Amelia Heinle) long con will be revealed. It looks like Victoria wants Ashland Locke (Robert Newman) heartbroken and down $250 million, so let’s talk about her new agenda.

Victoria seemed sincere when she went to Ashland and agreed to a reunion, but that’s kind of the point.

For Victoria’s latest plot to work, she had to play this just right and make sure Ashland believed in her commitment to him.

Of course, the part about Victoria being fed up with her controlling family seems to be true.

Victoria is taking matters into her own hands and doing things her way – just like she wanted to do after she finally accepted that Ashland was a schemer.

Ashland then gave $250 million to New Hope, so that’s a charitable donation that Victoria can accept.

It’s the remaining $250 million that Victoria apparently has an issue with since it’ll come back into play.

By calling Nick Newman (Joshua Morrow) and tipping him off to her New York venture, Victoria knew exactly what she was doing.

At this point, Victoria can predict her father’s moves awfully well and knew he’d find a way to make sure their investors backed out.

It turns out Victoria doesn’t want those investors at all, so she’s using Victor as part of her own scheme – a fact that will no doubt impress him once all this comes out.

Victoria will get Ashland to agree they should sink their own money into their new company instead, so she’ll claim she’s putting $250 million into it and will expect Ashland to do the same.

There’ll also be a seemingly lucky find of an office building that was a failed media company, so it’ll have all the equipment they need and will save lots of money.

That could help Victoria seal the deal and make sure Ashland keeps his $250 million end of the bargain.

Ashland and Victoria will settle on calling this Destiny Media, but it appears Victoria is taking charge of her own destiny and setting Ashland up for a huge fall.

That lucky office find may be something Victoria arranged in advance.

Nikki Newman (Melody Thomas Scott) feared Victoria might eventually kick Ashland to the curb and still find her own success without the Newmans, so that may be Victoria’s ultimate gameplan.

The goal seems to be scamming Ashland out of all the money he unfairly came into and breaking his heart.

From there, Victoria can run Destiny Media her way and show everyone who’s boss!

The Young and the Restless spoilers say Ashland is on the verge of a stunning discovery, so he should face the pain of knowing he got conned.

CDL’s the place to be for sizzling Young and the Restless spoilers, updates and news, so make us your go-to source.