The Young and the Restless Spoilers: Week of January 24 Preview – Adam Underestimates Sally – Chelsea’s Fight To The Finish 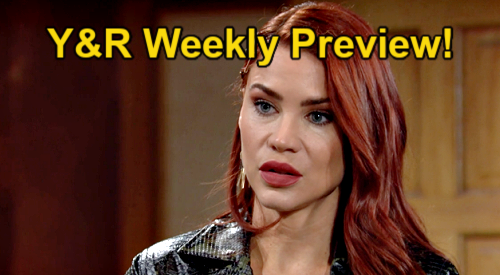 The Young and the Restless spoilers preview for the week of January 24 to January 28 reveals that Chelsea Lawson (Melissa Claire Egan) is ready to fight to the finish. Chloe Mitchell (Elizabeth Hendrickson) is fed up and Adam Newman (Mark Grossman) warns Sally Spectra (Courtney Hope). However, Sally believes that everyone is underestimating her.

Y&R spoilers reveal that Chloe is fed up with Chelsea and Sally’s war. Chloe had a vision for how Newman Fashion was going to take the industry by storm.

Chloe does have a dynamite team, but it only works if the trio can focus on business. Instead, Chloe is playing referee and that will continue during the week of January 24.

In the Y&R weekly preview, Chelsea complains to Chloe as she seethes while watching Sally laugh with Adam. Chloe clearly doesn’t want to hear any more about it.

Next, Chelsea issues a warning to Sally, which is more of a threat.

However, Sally claims there is nothing romantic going on between her and Adam. Chelsea basically calls Sally a liar and mentions she “wrote the rulebook” on plotting and scheming

The Young and the Restless spoilers reveal that Sally isn’t scared of Chelsea. When talking to Adam, he warns Sally that she has no idea who she is messing with.

In fact, Adam explains that Sally would be wise to back away from starting a war with Chelsea. Then, Adam places a bet and predicts that Chelsea will win hands-down.

This doesn’t make Sally back off, though. Anyone that watched Sally on The Bold and the Beautiful knows that Sally views warnings and threats as a challenge.

The Young and the Restless Spoilers: Sally Spectra Underestimated?

In fact, Sally squares her shoulders and holds her head up high when responding to Adam’s warning. Sally makes it stone-cold clear that he’s underestimating her.

Sally definitely is tenacious and goes to extremes to win, but so does Chelsea.

It looks like both of these women have met their matches. In fact, if these two worked together, just imagine what they could accomplish both personally and professionally!

Instead, Sally and Chelsea up the ante and declare war on one another. So, who will still be standing at the end? Are you Team Chelsea or Team Sally?

Be sure to catch up on everything happening with Y&R right now. Come back to CDL often for The Young and the Restless spoilers, news, and updates.

Never underestimate Sally Spectra! Tune in to see what happens next on all-new episodes of #YR on @CBS. Stream the latest on @paramountplus! pic.twitter.com/zdXWaprznW