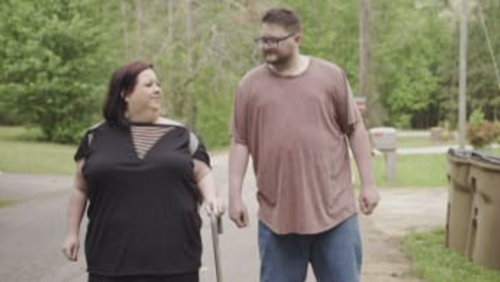 Tonight on TLC Too Large airs with an all-new Wednesday, January 12, 2022, Season 1 Episode 9 and we have your Too Large recap below. On tonight’s Too Large season, 1 episodes 9 called “Where Are They Now: Vanessa,”  as per the TLC synopsis, “Catching up with Dr. Procter’s patients as they embrace their incredible transformations. Some are living life to the fullest with their post-surgery bodies, while others struggle to stay on track.”

So make sure to bookmark this spot and come back from 10 PM – 11 PM ET for our Too Large recap. While you wait for the recap make sure to check out all our Television news, spoilers, recaps & more, right here!

Tonights Too Large Recap begins now – Refresh Page often to get the most current updates!

In tonight’s Too Large episode, Meghan and her husband take a walk. She used to bee stuck in the house. It was like prison. They talk about her weight loss and how it has been up and down a bit. She needs to see Dr. Proctor and get on the scale again. They talk about their commitment ceremony. She needs to find a nice dress. Something she can feel good in and wear again. After their walk, she shows him her dress choices. One is too summery, one is too white and tight while one is orange in tone. She doesn’t like the white dress. He thinks she needs to be happy and comfortable.

Vanessa has had a rough few months. She had cancer on her labia. That caused her to gain weight. Her dog also had puppies. Now she needs to buckle down and lose weight. She stands up after playing with the puppies and works out. She wants to cry but she needs to keep going. She wants the surgery and wants to be normal.

Meghan and Vanessa meet at the doctors. Meghan is there to support her. She also has questions for herself. Vanessa tells the doctor about all of her challenges and cancer. She wants to keep trying. Meghan weighs in after. Her weight is moving slow. The doctor lectures her a bit about getting back on track.

They both set goals and plan to return next month. Corey and Diana head to do a photoshoot thats all about body positivity. They both don just their underwear with black statements painted on them; “too fat, too thick, too gay, too much,” ect. They take great photos together. Corey just wants to be seen for him. He has never felt better.

George has lost another 50 pounds. He is feeling great lately. He recently went bowling and now he is going to a sporting event. These are all things he couldn’t do before. He is so much happier and his mom is proud. He and his brother head to the game. Dr. Proctor is there to surprise him.

This is all surreal. He has only ever seen the stadium on TV for the Falcons. He also appreciates Dr. Proctor coming to a game with him. Before his surgery, they discussed sports and his love for them. Now see is here and enjoying life.