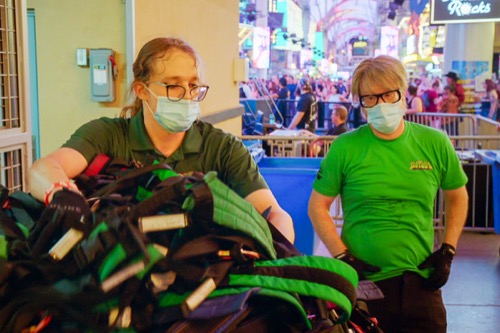 Tonight on CBS their Emmy award winning reality show, Undercover Boss continues with an all new Friday, January 14, 2022, season 11 episode 2 called “Fremont Street“ and we have your Undercover Boss recap below.  On tonight’s Undercover Boss episode as per the CBS synopsis, “Andrew Simon, president and CEO, Fremont Street Experience, who began his job at this hugely popular Las Vegas attraction at the start of the pandemic, goes undercover to discover and address problems that may be sparking the labor shortage causing significant lost profits.

Will the boss “see the light” while perched 100 feet off the ground to help change light panels on its enormous $50 million canopy? ”

On tonight’s Undercover Boss episode, the President and CEO Off Fremont Street Experience was the latest boss to participate in “Undercover Boss”. His name is Andrew Simon and his company operates in Las Vegas. It was known as the Fremont block. There was a casino, there was ziplining, and there were concerts. But the business took a hit as they faced one of the most devastating economic crisis.

The pandemic brought many cities to a standstill. This included Fremont Street Experience. Things have gotten better with cities opening back up and so that led to a new issue. The company was experiencing a huge turnover. It was a staffing crisis.The same amount of people they hire is the same amount that’s quitting. And Andrew wants to know how he can fix the problem.

Andrew went in undercover. He got a makeover as well as a wig. He also went to work with Emmie. She’s been with the company for twenty years and he wants to know how he can get more like her. The cameras followed them as Emmy tasked Andrew with cleaning up gum.

They had to drive around the whole street as they cleaned up gum from the sidewalk. It turns out people are disgusting. They spit out their gums wherever they please. Emmy said that it usually takes two hours every work day to clean up the gum. They have a gum machine. Only it needs a power source and a cord can be a tripping hazard.

Emmy mentioned how they needed a machine with the cord. Andrew admitted in his confessional that he was going to look for one because it would save the staff from wrist and knee pain. Their next task was doing the dumpsters and a lot of the dumpsters were old.

They even leaked and so Emmy finds herself constantly mopping around the area. There was also the real ick factor. They had to mop up pee. Some people use the street as their bathroom and they pee in the corners. Emmy doesn’t mind it. She’s lived in the area since 1973. She loves her job. The only thing that she would change is the pay freeze.

No matter how long you’ve worked at the company, the pay stay the same. Andrew couldn’t believe that when he heard it and so he was going to change that the moment he drops cover. Andrew also went to work with a nice guy named Ronald. He was a manager with the technicians. They were in charge of the canopy lights and Ronald had been there for over twenty years.

He said how he had to take a pay cut when the bosses rearranged things and by then he had already been working for the company for eighteen years. They didn’t consult him. They just cut his pay. If Ronald didn’t love his job so much, he would have walked out.

Another thing that Ronald brought up was that the hotel doesn’t close their windows. People would throw their trash from out a window onto the canopy and it was Ron’s job to clean it. He had to climb up over 90 feet in the air. He had to clean everything by hand and he’s tried complaining. He gave it to his bosses who were supposed to talk to people from the hotel end and nothing’s changed since then. Andrew knew right away that he was going to talk to people at the hotel. He couldn’t risk someone damaging the canopy that costs fifty million dollars. And so those windows were about to be nailed shut.

Andrew next went to work with Josephine. She was the Team Lead in the ziplining experience. This again required going to great heights and so Andrew had to conquer his fear of height. He had to do this one because the turnover in this particular field was at a hundred percent. They didn’t even have all the ziplines in use because the turnover is that bad. Andrew realized that the time pressure as well as the heavy equipment was very tasking. It was also hard. He struggled with getting the harnesses on people right. He also at the end of his time with Josephine had to go to the other end of the zipline to gather the harnesses and those things were heavy. They were twenty-five pounds at least.

Andrew struggled with the heavy equipment. It made him realize why so many quit this job after a while and he talked to Josephine. The hardest thing on the job when she misgendered. She’s a transgender woman. She’s been physically transitioning since January 2020. The guests tend to call her a man in spite of her name tag and so she asked for another tag with her pronouns on it. Andrew got her that name tag. He didn’t want her crying in the bathroom anymore. Andrew also got new equipment for everyone. He also wrote a check for everyone and he increased Emmy’s pay. He got her that trip she always wanted to take with her husband to Hawaii.

And he sealed those windows.