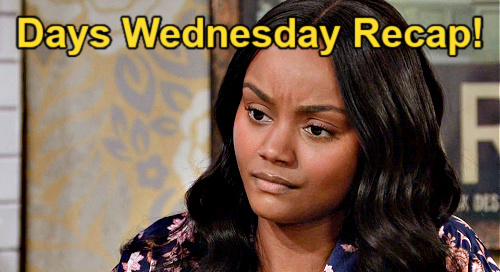 Days of Our Lives (DOOL) spoilers recap for Wednesday, January 25, reveals that EJ DiMera (Dan Feuerriegel) did what he promised Stefan DiMera (Brandon Barash) when he arrived at Li Shin’s (Remington Hoffman) hotel room and fired him.

Li tried to protest, but EJ insisted Stefan knew the truth and forgave him for his part in all the brainwashing drama.

EJ said this should be a lesson to Li that no one crosses a DiMera and gets away with it.

Stefan acted like he meant Kristen DiMera (Stacy Haiduk), so talk turned to the latest tragedies in town.

That left Nicole worried about Eric Brady (Greg Vaughan) before the conversation shifted to EJ’s knowledge of Stefan’s brainwashing.

At the Hernandez house, Gabi Hernandez (Camila Banus) was annoyed when Wendy Shin (Victoria Grace) showed up with a bouquet of flowers and another apology.

However, Gabi heard Wendy out and decided to forgive her.

Wendy heard about all the deprogramming problems and how Stefan was repulsed by Gabi’s attempt to get dying Marlena involved.

That left Wendy suggesting an intervention to help Stefan see that he needed to undo the damage and make his own decisions.

Unfortunately, Gabi didn’t see how anything could be done since Marlena was gone and Dr. Wilhelm Rolf (Richard Wharton) was still in the wind.

Wendy was surprised over Gabi giving up, so Gabi mulled things over once she left and decided to do something.

Back at the DiMera mansion on Wednesday’s Days show, EJ assured Stefan that he fired Li and that he’d get the ball rolling on the paperwork to be co-CEOs.

Stefan suggested a Champagne toast, but he ultimately offered a mimosa since it was still pretty early.

While EJ was out of the room, Stefan gleefully took out a vial and drugged one of the mimosa glasses.

After a few doses of this, Stefan insisted EJ would start behaving strangely and that his judgment would be so impaired that the board would have to remove him.

Meanwhile, Gabi snuck up behind Stefan, grabbed a nearby statuette and knocked him out with it.

Once Stefan was unconscious on the floor, Gabi stared down at him and seemed on edge.

At Allie Horton (Lindsay Arnold) and Chanel Dupree’s (Raven Bowens) apartment, they had a tense breakfast before Chanel pushed Allie to talk about what happened at the hospital.

Allie acted like she wasn’t serious and refused to let Chanel spin this back around on her.

Chanel wanted to be there for Allie and admitted she needed support too due to Sloan Petersen’s (Jessica Serfaty) civil suit.

In the end, Allie got fed up all over again and ended her conversation abruptly.

Next on Wednesday’s Days episode, Johnny stopped by to see Tripp Johnson (Lucas Adams), who had a black eye due to Johnny’s recent punch.

Tripp let Johnny in, so that gave Johnny a chance to apologize – both for the things he said about Ava Vitali (Tamara Braun) and for decking Tripp.

After Tripp accepted Johnny’s apology, Wendy stopped by a little later. Tripp filled Wendy in on Ava’s doctors not wanting him to come anymore since he might trigger another episode.

Since Wendy had been on an apology tour of her own, she explained how Gabi forgave her and hated that there was nothing Gabi could do about Stefan.

Back with Chanel, she opened the door to find Johnny while she was home alone. Chanel thought Johnny should probably keep his distance right now, but he pointed out that he was there looking for Wendy.

At Sloan’s place, she marveled over Marlena Evans’ (Deidre Hall) wild obituary and struggled to believe some of the shockers were true.

Eric got passionate with Sloan, but he couldn’t stay for round two since he needed to help with Marlena’s arrangements and be with his family.

Sloan told Eric he shouldn’t be a stranger and smiled at him as he took off. Soon after, Eric bumped into Nicole outside the pub and got her condolences.

Nicole hesitated before asking Eric if she could give him a hug, so he agreed she could. Eric and Nicole shared a warm moment as they embraced, but Sloan’s arrival killed the mood.

Once Sloan suggested she was sorry for interrupting, she told Eric that he left his phone in her bed. That news led to Nicole looking annoyed over Eric’s hookup partner.

Days of Our Lives spoilers say Nicole and Sloan’s run-in is about to take a shocking turn, so stay tuned.

CDL will have other terrific Days of Our Lives spoilers, news and updates, so make us your one-stop DOOL source.