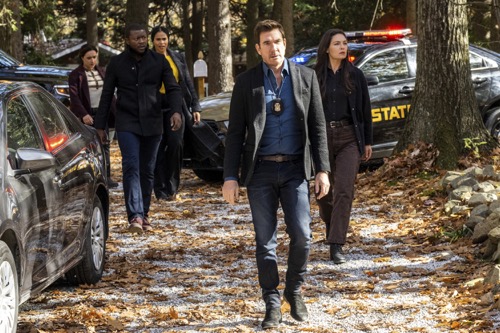 The team races to track down the perpetrator and learns what really happened to the psychiatrist’s client. Also, Kristin confronts her own deep-rooted trauma.”

In tonight’s FBI: Most Wanted episode, a psychiatrist was taken, hostage. The psychiatrist focuses on children going through some sense of trauma. She also focuses on generational trauma. She’s written several books about it. She was helping kids and she was helping Noah’s sister, but Noah demanded to know what Ruthie told the shrink in her sessions and Dr. Olivia Kramer couldn’t tell him that.

It was privileged information. She was trying to get him to leave because she couldn’t talk about her patients and he got mad. He pulled a gun. He took her hostage. He first took her to a motel room where he again demanded to know what Ruthie told her about him.

With a gun in her face, Kramer that Ruthie loved her brother. She always spoke glowingly about him. But that wasn’t enough for Noah. He wanted to know he wasn’t allowed around her anymore. He tried to get answers from Kramer. Kramer tried to get him to talk about himself. Or if not himself then maybe his father.

Noah mentioned his dad briefly to say this was all his dad’s fault. Noah has been struggling with drugs because of what his dad did. Kramer was finally getting Noah to talk about it when they saw the news. Noah was wanted for abducting Kramer. They had to go to a second location.

Only the FBI was looking for them. Kramer’s abduction was overheard during a zoom meeting and they quickly identify the perpetrator as Noah Tramble. Tramble was accused of molesting his half-sister Ruthie. When Ruthie was five, she was sleeping naked in a bed with her fourteen-year-old brother.

He was also naked and spooning her. The brother reeked of booze. He just kept saying he couldn’t remember if he did anything to Ruthie. He was too high back then. His mother didn’t file official charges. She just kicked him out of her house. He went back to his dad’s and his dad was no cakewalk either. The dad was a sexual predator. And was now in prison.

Everyone believed that Noah should join his dad in prison. His mother’s second marriage fell apart because they hadn’t called the cops on him when they should have and now he wants to ruin another little girl. Noah was dating a single mom. She was the mother to a five-year-old girl.

The same age as Ruthie when he did what he did. Rose had just seen her ex-boyfriend’s face on the news. She called 911. She refused to hear him out as he tried to get Kramer to convince Rose to take him back. Kramer used the confusion to get away with Rose’s daughter and Rose was eventually released by Noah as well.

Noah didn’t want to believe he molested his sister. He kept trying to get Kramer to say he didn’t do it when he had her and he shot her when she got away, but the cops later found Kramer and Chloe, and Rose. Kramer said she’s surer than ever that Noah molested his sister. Ruth was too young to put what happened to her into words. She instead talked about a monster coming to get her. But she’s older now. She’s remembering more and more. She told her brother about Dr. Kramer because she thought Kramer could help him. And instead, he tried to use Kramer to cover up the fact he might be a predator.

If he didn’t do anything to Ruth, then why would get together with a woman with a child around that same age? Why wouldn’t he talk about his father? Why couldn’t he remember that night? He had been into drugs for a while and by a certain point you build up a tolerance. Like not getting drunk on the first drink anymore. He should have been able to remember. Unless he doesn’t want to remember at all. Noah eventually heard about his sister being in the hospital. Ruth tried to kill herself after she heard what Noah did to Kramer. And so she blamed herself for what happened because she believe she could have stopped him.

Ruth admitted to Kristin that she has been molested more than once. Kristin was later escorting Ruth and her mother when Noah kidnapped them and then drove away with Ruth. Ruth admitted there was more time when she was molested to him. She told him how sorry she was that she ruined his life. But Noah realized if it wasn’t him then the only other person who could molest his sister was his stepdad. His stepdad divorced their mom, got remarried, and now he has a little girl with his new wife. And so both Noah and Ruth showed up at the man’s house. They questioned him about what happened to Ruth.

The man confessed to everything. The stepdad was worried that Ruth would talk and so he drugged Noah and put Noah naked in Ruth’s bed. He wanted to blame it all on Noah. He ruined Noah’s life and Noah was going to kill him when the FBI showed up.

The FBI talk down Noah arrested him and arrested his stepdad. They were both going to face a long time in prison.