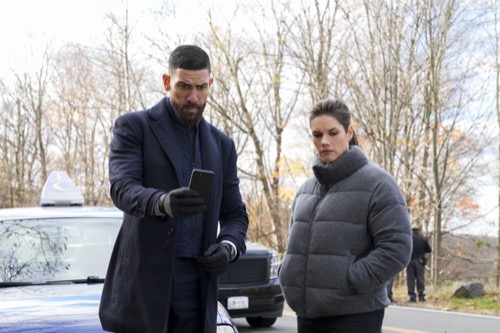 Tonight on CBS FBI  airs with an all-new Tuesday, January 3, 2023 season 5 episode 10, “Second Life,” and we have your FBI recap below. In tonight’s FBI season 5 episode 10 called, “Second Life,” as per the CBS synopsis, “The abduction of a young woman leads the team back to a cold case from 18 years ago, which pushes Isobel to reconnect with her old partner Jake (Tate Donovan) and take another shot at solving one of her first cases at the Bureau.”

In tonight’s FBI episode, A young woman was making deliveries when she got abducted. The guy was waiting for her in the delivery car. He was in the backseat and he managed to surprise her before she could escape. Now, this man pointed a gun at Chloe Rogers.

He made her drive to a secondary location where he had another car waiting for them. He had the whole thing planned out beforehand. The police only learned of it when they later found the delivery car. They thought it was odd that someone would steal a car with a massive pizza on it and dump it upstate however they found security footage from the city of the car being driven. The footage showed the man with a gun trained on Chloe. It also pointed authorities toward the abduction.

Until they saw that footage, they thought they were simply dealing with car theft. The footage was what told the local cops as well as the FBI that Chloe was in danger. FBI investigates abductions and so they caught this case. The first thing they did was try to determine when Chloe was taken. She was reported missing by her employer.

Her boss was also her boyfriend. He got worried when she never returned after making a delivery. He tried calling her and he got worried. He also had to report her missing because again she was in the company car. It had to be written up for insurance purposes.

But the boyfriend hadn’t seen Chloe in hours. He also mentioned she had a bust-up with a college kid a little while back. The FBI looked into it and they found out she got into a fight with Brent Porter. He followed her from a bar back to her hostel. They were seen arguing on security footage outside of the hostel.

It turns out Chloe’s name wasn’t Chloe. It was Tasha when Brent first met her. He said she used to be a housekeeper. She was employed by his parents until she robbed the place and disappeared. It’s why he got so angry when he saw her again. He confronted her about what she did to them.

Brent wasn’t their abductor. He had an alibi. He also made the FBI test Chloe’s DNA to find out what her real name was and it wasn’t Chloe or Tasha. Her real name is Annabelle Collier. She was kidnapped when she was four years old. She was believed to have been killed by a sexual predator that she had as a neighbor.

The neighbor was recently released from prison on a technicality. FBI Special in Charge Isobel Castillo had worked the case with her partner. They firmly believed that Annabelle was dead. They stopped looking for her. They assured her parents that she was gone. Her father died of a heart attack a few years after that. And her mother was left on her own.

Naturally, suspicion in the second abduction of Annabelle fell on the man who claimed he killed her. Isobel, or to better put it, her former partner still believed Eddie Lyman was responsible for Annabelle’s kidnapping. Jake believed that Eddie simply traded Annabelle to another predator while he was in prison. He claimed Eddie got her back the moment he was released. Only they tracked down Eddie. Eddie said he never had Annabelle. He never took her. He doesn’t know who did. He only confessed because he was railroaded by an inept counsel and an overly aggressive FBI Agent.

Eddie wasn’t their guy. But he still helped the FBI with their current case. The person who grabbed Annabelle had been wearing a class ring from the same school and year as Eddie and so the FBI was able to come up with at least six suspects in who possibly kidnapped Annabelle as a little girl as well as an adult. There was just one problem. That part of Staten Island was like a small town. They couldn’t get people to talk without a prior relationship and that’s why they ended up going back to the one person they felt for sure would help. They went to Annabelle’s mother. And Joan wasn’t happy to see them.

Joan was distraught to find out her daughter was alive this whole time. She blamed the FBI. She said her daughter could have lived through impossible horrors and that they had failed to rescue her. She was particularly angry at Jake who was dismissive of her pain. Jake just kept saying that Annabelle being alive was better than her being dead.

It was Isobel who got Joan to talk. Joan was shown a picture of the six men that were suspects. She identified one of them as Jeff Whelan. He used to work for her husband. He also was an orphan whose parents died early and she thought it was sweet that he paid Annabelle so much attention. She said he stopped showing up when Annabelle went missing.

It turns out Jeff Whelan kidnapped Annabelle all those years ago. He forced her to pretend he was her father, moved her upstate, and he had everyone fooled. They all thought he was just super protective. They thought she was simply acting out when she ran away from him five months ago. But Annabelle was trying to get away from him and he tracked her down and kidnapped her again. He went to another small town. This time called Nelsonville. They tracked him down with the PO box he uses. He was going by a false name, but it was him. Whelan saw that he was being followed and he tried to flee. He went back to his house in the woods.

The FBI followed him to the house. They went after him once he tried to flee on foot. They captured Whelan and he wouldn’t tell them where Annabelle was. They searched the house. It was rigged to blow. They got out in time. But Isobel felt for sure that Annabelle was still inside. She went into the house. She went against safety protocols and probably broke several other rules but she couldn’t fail Annabelle again. And so Isobel didn’t leave that house until she found and rescued Annabelle from a hidden compartment.

Annabelle was later reunited with her mother and those two were on the path to finally healing some old wounds.

Jake invited Isobel out for drinks after everything was over, but she simply told him “no”. They should have found Annabelle seventeen years ago. And they both know it.