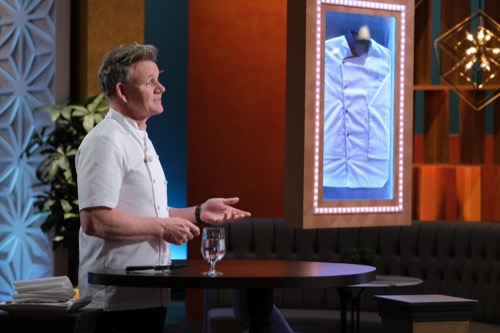 Tonight’s Hell’s Kitchen recap begins now – Refresh the Page often to get the most current updates!

In tonight’s Hell’s Kitchen episode, things were tense behind the scenes. Some were missing their families. They would want a video if they couldn’t see them in person and anything. Even a kind word would lift up the general mood for everyone. Chef Ramsay must have noticed the mood because he said he’d understand if they’re missing home.

He also said the best to honor the ones you love was by doing them proud in the next challenge. Ramsay’s next challenge was the Black Jacket Challenge. The contestants all had to cook a dish that’s close to home. They didn’t have that much time. Yet, they all pulled off great dishes. They were great because they were all cooked from the heart.

However, Chef Ramsay did give them notable critiques on each and every bit of their dishes. One put too much butter in his risotto. Another undercooked their lobster.

It was a tough choice to award those black jackets and still Ramsay came up people worthy of them. Sommer and Dafne both won the black jackets. Their dishes were the best in skill as well as execution. Dafne was one of those people that were missing their families and so the being the second person awarded a black jacket had given her a reason to be happy again in spite of still missing her family.

Now, the remaining contestants were given another shot at the black jackets. The first challenge was when they had to cook from the heart. The second challenge however was them cooking for a menu. There were five contestants.

They were given menus from exclusives restaurants around the world and it was up to the contestants to recreate one of the dishes they saw on the menu. They had some to prepare their dishes, but when time was called, they were all pretty nervous of what Ramsay would say. Only Ramsay was never cruel. He gave them pointers on where he saw room for improvement. And there were more dishes to judge.

Alejandro won the third black jacket. He almost went home during the last elimination and so him getting his black jacket was the best turnaround. Alejandro was so happy that he ditched that blue chef jacket like it was nothing to him. He even flung off the blue bandana he had been wearing before then. The next person to wear a black jacket was Alex. Alex was confident going into this round of the challenge and he’s one of the last two in the “40 something” category. And so the other black jackets welcomed him with open arms.

As for the final round in the Black Jacket Challenge, they were all assigned a pork chop. They have to cook that meat to perfection. They have to deliver a restaurant quality meal. It was the final round for the final jacket. The three contestants all did great in the time they were given. Then they put their meal up to judge and that’s when Ramsay surprised them. Ramsay asked the remaining contestants to go wait in his office. He didn’t want them to see the judging and there was a reason for it. It wasn’t Ramsay that tasted the dishes.

It was the black jackets. Sommer was called down first. She tasted all three dishes and she told Ramsay which dish she felt was worthy of a black jacket. After she gave her opinion, Ramsay called up Dafne. Then Alejandro. And finally Alex. They were all in agreement that someone undercooked their meat and so that person couldn’t win a black jacket. They had to be sent home. The person with the worst dish was Sakari. And Sakari was told why they didn’t like his dish. He delivered up two undercooked dishes during this challenge and he just couldn’t stay around to make a third.

Then there was the final black jacket. The final black jacket went to Cheyenne. It was another win for the “20 something” category. The young bucks have almost entirely gotten rid of the forty years olds. It was just Alex that was left. And now he has to sleep with one eye open.