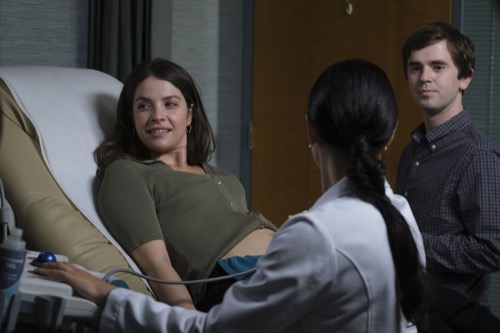 Tonight on NBC their new medical drama “The Good Doctor” airs with an all-new Monday, January 23, 2023, episode and we have you The Good Doctor recap below. In tonight’s The Good Doctor season 6 episode, 8 called, “Quiet and Loud,” as per the ABC synopsis, “Shaun and Lea soon learn that their surprise pregnancy may also come with additional complications. Meanwhile, Doctors Park, Reznick and Allen treat a teen with Gardner’s syndrome whose past surgical history jeopardizes the outcome of his current one.”

Tonight’s The Good Doctor episode begins with Audrey, she is up around on a cane at home. At work, Marcus tells Audrey that Clay is a saint waiting three months for an answer to his proposal. Daniel wants back in the hospital, Audrey and Marcus tell him that they will support him, but he will be monitored and supervised. He the sees Jordan, and she says she hasn’t heard from him. He tells her that she is not the reason it happened. She tells him that she is the supervisor on his case, she will watch him and get urine samples from him.

Lea is getting an ultrasound, she made it through the first trimester. There is a small thinning area on her uterus wall, but it is very possible that the lining will remain stable and everything will be ok. She is put on bed rest and she will be monitored closely. Shaun says there may be a surgery that can fix this, he needs to speak to Audrey and Aaron.

Shaun goes to see Audrey and Aaron and tells them about Lea,

Alex and Morgan go to see a patient who has had twenty surgeries, chemo and hospital stays. He is waiting for a small bowel donor, his mother calls him D, he is a young man.

Lea tells Shaun she is nervous about surgery, she just keeps thinking about what can go wrong. Aaron and Shaun practice the surgery, Shaun wants to make sure that everything goes ok.

D is having pain in his abdomen, Morgan finally has a small bowel for him but because of the pain Alex doesn’t think they can do it. Meanwhile, Lea is in surgery, Shaun keeps interrupting and Aaron has to tell him to be quiet.

Lea is awake from surgery, Shaun tells her that she has to stay in the hospital several days for monitoring, she doesn’t want to. Asher tries to cheer her up but Shaun tells him to leave because she needs rest.

Morgan is going to a clinic to freeze her embryos and Alex wants to go with her, but she says no, she is doing this alone.

D is in more pain, he has an infection in his abdomen.

The nurses send flowers to Lea and Shaun intercepts them and doesn’t allow her to have them as is, he removes all the baby’s breath. Asher tells Shaun that Lea is not ok, she is bored and being in the room is brining up a lot of bad memories, and she needs more than Shaun, she needs her friends, she needs love.

Audrey asks Clay if it bothers him that the ring has been sitting on the table for three months, he says no. But, he doesn’t want it to come between them, so he closes the box, takes it away and tells her that he doesn’t want to pressure her.

Daniel tells Jordan that he wishes that he had made her dinner that night and not called his dealer, he is sorry.

There is a way to save D but it comes with risk, he will get his transplant and hopefully save his life. Jordan gets a text from Shaun, he says she can visit Lea. Jordan tells her that she has faith in her and her baby, and that everything is up. Shaun walks in and tells Jordan that her ten minutes are over.

Morgan tells D that the surgery can buy him a year, maybe more, but it should be about what he wants. He is 17 and has suffered more than most people their whole lives. He says he can’t be done, he can’t leave his mom alone just yet and any more time he can have with her, will make things easier when he is gone.

Lea is nauseous, Shaun does another ultrasound and he finds that she is bleeding internally. Shaun wants to go into the operating room and Aaron says no, he needs to let them do what they have to.

Alex tells Morgan that he doesn’t feel bad for her, he feels bad for him because he won’t be a part of what she wants to do.

Daniel tells Jordan that he is going to ask not to be supervised by her. He is afraid that if he stays close to her he will want to be with her again and he is not ready for that, he needs to fix himself first.

Lea is still in emergency surgery, a lot of staff are sitting outside the operating with Shaun as he waits it out.

Aaron comes out of the operating room, he tells them Lea and the baby are going to be just fine. Shaun is relieved. If Lea was not in the hospital when this happened, she may not have survived, he saved both their lives. Shaun runs into Aaron’s arms and thanks him. Aaron says he’s got him.

Clay sits at the breakfast table, Audrey tells him that she loves him, she loves us and she has decided that she wants us to move forward. She takes the ring box, opens it, there is a key, and she asks him if he will move in with her. He tells her that she has made him the happiest man alive.

Morgan is leaving home when a car pulls up, it is Aaron, he is driving her.

Lea gets another ultrasound, everything looks great. Asher asks if they want to know the sex of the baby, Lea looks at Shaun and she figures out that he already knows. It’s a boy.