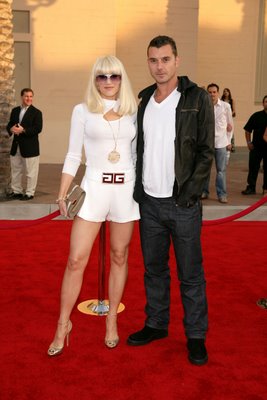 Singer Gwen Stefani finds it ”bizarre” her everyday life is thought to be interesting enough to fill up gossip columns – even though she reads celebrity magazines herself.
The star gave birth to her first child Kingston with husband Gavin Rossdale in May (06), and when pregnant found herself under siege from the paparazzi. She says, “I got caught up with the whole celebrity pregnancy thing. For an entire year, I had people outside my house, waiting for me to come out. “I am like anyone who enjoys a nasty bit of gossip. Like, don’t let me open one of those magazines because I can’t put them down. We’re all addicted to it – it’s gross, but it’s entertaining. But I’m the one who has to live it.
“In LA, there would be mornings where I’d be sleeping with my French doors open, in the heat, and I’d be woken up by chatter.
“I’d look out and there’d be these guys in lawn chairs, hanging out, having a coffee, ready to chase me around all day.
“Like, wow. Who am I? What happened? That’s a bizarre life, isn’t it?”
source