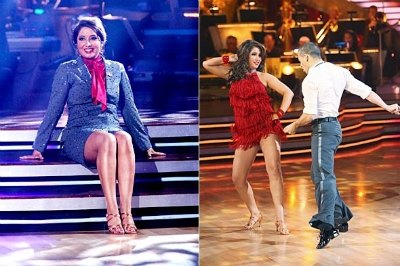 “Teen activist” (cough, cough) Bristol Palin says that she’s shocked that she is still on Dancing With The Stars….and I’ve got news for her! She’s not the only one!

Her dancing leaves a lot to be desired and we thought it would be curtains for Bristol after her performance a couple of weeks ago in that bear costume. But no, she was allowed to stick around for more humiliation, probably because of who her mother is.

In a new interview, Bristol said, “I’m shocked that we’re still around, but I’m thankful for our fans out there that have voted us back each week.”

Her partner, Mark Ballas, said, “She’s improving every week…If you watch the first tape, to last week, it’s pretty awesome. Y’know what I mean? Now a lot of other couples in this competition you see that growth.”

Bristol says that her little boy, Tripp, is also a big fan of her on the show. She added, “After the show I’ll go home and watch it back with him, and he loves it. He thinks it’s hilarious.”