BY Annemarie LeBlanc on March 22, 2010 | Comments: 9 comments
Related : Dancing With the stars 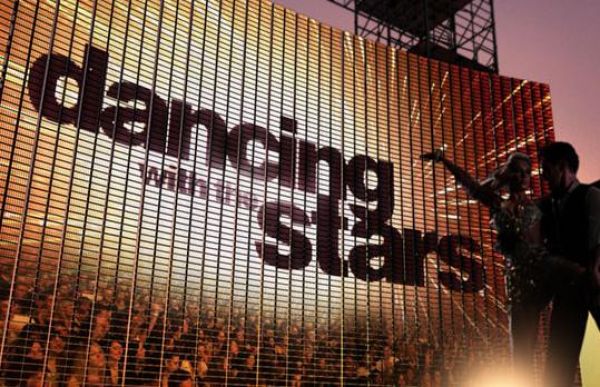 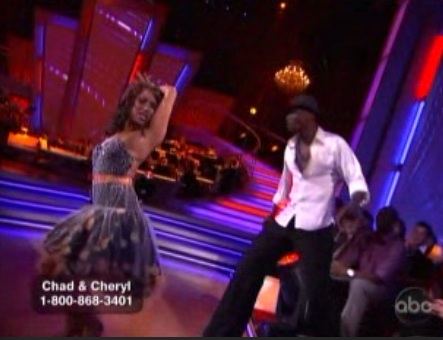 Live, this is Dancing with the Stars.  Tom Bergeron announces his new co-host Brooke Burke. Then, here they are.. the stars of season 10. First up, is this year’s most outspoken star, Chad Ochocinco with two time champion Cheryl Burke dancing the Cha-cha-cha. I don’t know where Cheryl found that horrible outfit, it looked like something from the Little Mermaid.  On the other hand, Chad was sexy with a great posture and shirt buttoned down, giving us ladies lots of eye candy. 7/10 from Rosie. Bruno: 6/10 Carrie Anne:6/10 Len:6/10. 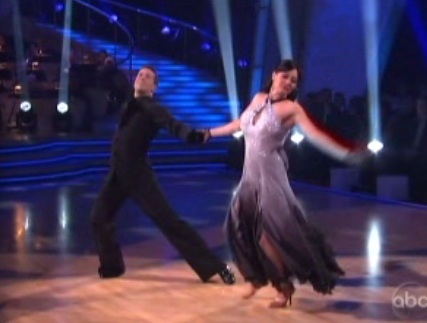 2nd team up is Shannon Doherty and two time winner Mark Ballas doing the Vienesse Waltz.  I have no hope for this one, gotta feel sorry for Mark, he is probably missing Chloris Leachman right about now! Shannon was so out of place on the dance floor, I almost felt sorry for her, well,, almost. Bruno said her arms were flowing like a primate, no kidding.  Ofcourse Shannon keeps telling us that she is dancing for her dad, so it is kind of hard to be mean to her. But you know me, I’m going to tell the truth. She sucked. 4/10 from Rosie. Bruno: 6/10 Carrie Anne: 6/10 Len 6/10. 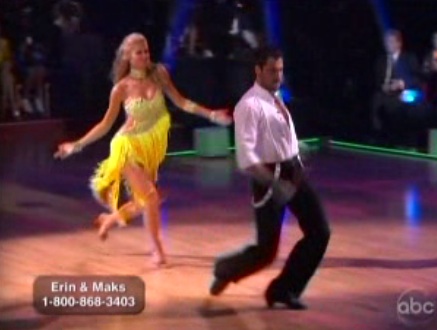 3rd up is Erin Andrews with the sexiest dancer on the show, Maksim Chrnerkovskiy dancing the Cha-cha-cha.  She looked like an undernourished Big Bird and danced like one too. Maksim was his usual sexy self, but what is up with the suspenders? Len almost had it right, he called Erin a Funky Monkey.. well the Monkey was right.  I for one could not see the zest and vitality that Bruno saw in her, maybe he was confused and was staring at Maksim! 5/10 from Rosie (only because she was partnered with Maksim). Bruno: 7/10  Carrie Anne: 7/10   Len: 7/10. 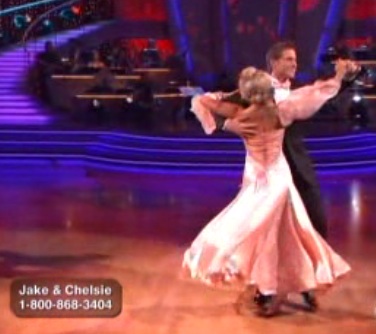 4th up is Jake Pavelka and Chelsie Hightower. Hopefully Jake has a better partner on the show than gold digger, Vienna that he chose on the Bachelor. Poor Jake, besides having the whitest teeth, his dance moves fell flat. He was so stiff and rough – he won’t last long. Len told him to stop sticking his bum out and Bruno told him he was too rough and kept bashing Chelsie around. 6/10 from Rosie. Bruno: 7/10 Carrie Anne: 7/10 Len: 6/10 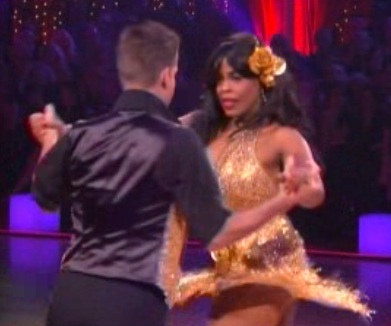 5th up is Niecy Nash with Louis Van Amstel dancing the Cha-cha-cha. Personally, I didn’t think there was anything to like about this woman, but, I confess to being wrong. Niecy is actually full of personality and pulled of the routine, if not the best technically, at least entertaining. Len and Carrie Anne liked her, grumpy Len didn’t. Rosie 7/10 for entertainment value! Bruno 6/10 Carrie Anne 7/10 Len 5/10.

THE REST OF THE RESULTS UNDER THE CUT 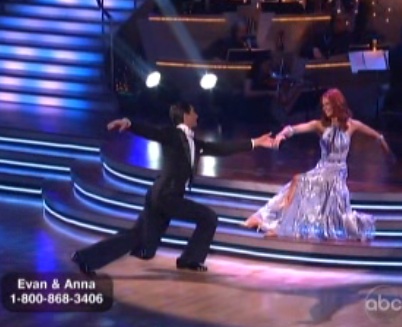 6th up is Evan Lysacek and Anna Trebunskaya who is hungy for her first Mirror Ball trophy. I think Evan is going to do very well because of his skating ability. Dancing the Vienesse Waltz Evan glides with grace, but is a little too stiff with some parts. Carrie Anne loved him, but reminded him to point his toes. Len said that he had clumsy feet and Bruno, like me, thought he was graceful. Rosie 8/10, Bruno 8/10 Carrie Anne 8/10 Len 7/10.

7th up is MOONWALKER, Buzz Aldrin and Askly Costa who hasn’t been on the show since season three. At 80 year’s old, Buzz is in amazing shape, but the Cha-cha-cha, poor Buzz. What can I say, he was surpirsingly fantastic! Grumpy Len had to call it like it was, but Bruno said it right, how can we critisize a legend. Carrie Anne said he was inspiring, she was right. I think he danced better than Shanon Doherty. Rosie 6/10, Bruno 5/10, Carrie Anne 5/10 and Len 4/10. 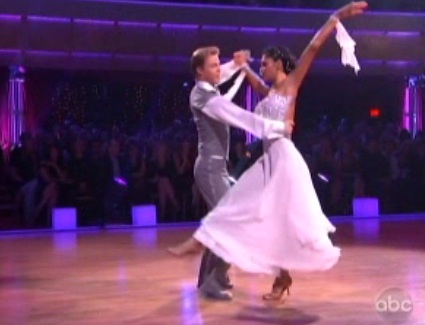 9th up is Super Hottie and Soap Stud, 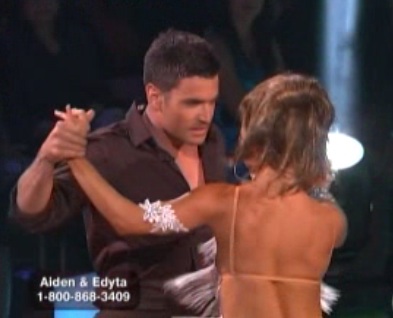 Aiden Turner and partner Edita Sliwinska. OMG, he is so handsome, the Reality Queen is out of breath! He was a little slow, but oh so very sexy, which ofcourse made up for any faults. Carrie Anne didn’t like it, nor did Len or Bruno. They called him stiff as a plank, oh please, they gave Funky Monkey Erin all 7’s – are they blind? Rosie 7/10 (for extreme sexiness) Bruno 5/10, Carrie Anne 5/10 and Len 5/10. 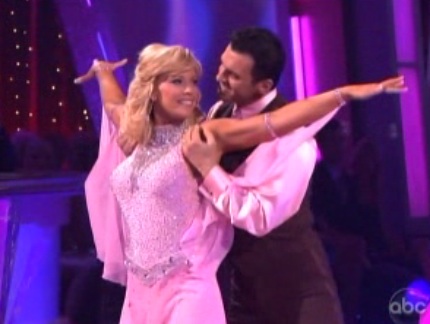 10th up is Kate Gosselin and Tony Dovolani dancing the Vienesse Waltz. No matter how she dances, as a mom, I give her a 10/10 for trying. This woman is absolutely amazing, despite everything her loser husband has put her through, having the nerve to come on national television dancing without any experience, she is brave! Bruno told her that her technique was terrible and he was sadly very right. Rosie 7/10 (for bravery), Bruno 5/10, Carrie Anne 6/10 and Len 5/10. 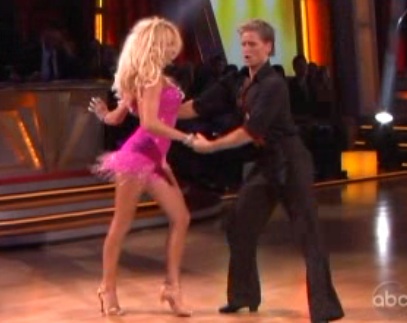 11th up is Pamela Anderson and "DWTS" newbie Damian Whitewood dancing the Cha-cha-cha. Pamela admits she has no talent, but loves music. Surprisingly Pamela didn’t do too bad, I’m sure that there are many men drooling over the widescreens tonight! I really think she did very well for someone with no experience; she wasn’t stiff like some of the others. Bruno said that all he could think of was sex, sex and more sex and of course Len didn’t like it, but Bruno said “but the sex was good”. The cameras moved over to Nicole Scherzinger and if looks could kill, poor Pamela would have been dead and buried. I think that we may have a little cat fight brewing, yummy. Rosie 8/10, Carrie 7/10, Bruno 8/10, Len 6/10/

At the top is Nicole and Derek, not surprising, but the people are voting and I think they are going to oust Nicole early on. See you next week! Rosie xoxo