Did Mel Gibson Abuse His Former Girlfriend Or Was She Abusing Him? 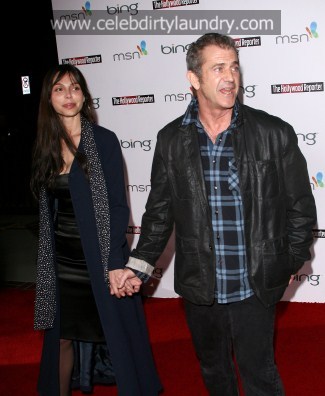 Legal representatives for Oksana Grigorieva – the mother of the actor’s eight-month-old daughter Lucia – attended an emergency hearing at a Los Angeles court on Monday (20.06.10), where the judge was told theMel Gibson had been “extremely violent” towards his former partner.   The order prohibited Mel from having any contact with the Russian singer – who he split from in April – but his lawyers then returned to court to have it modified so he could see their daughter.

A source close to the star insisted the allegations against him were false.   The source told gossip website TMZ: “In these cases, when somebody cries wolf, the judge is mandated to assume there’s a wolf, until a full hearing can be held.”   Oksana, 39, has refused to comment on the situation, saying only: “I can’t talk about that” when asked if the actor was ever violent towards her.
However, one of her friends confirmed the alleged violence happened in January but added: “There were other acts after January that were not physical but still constituted domestic violence."

It was reported yesterday (25.06.10) that the 54-year-old actor has also sought a restraining order against his former partner.   It is now believed that the legal papers were served in a bid to keep certain information out of the public eye.