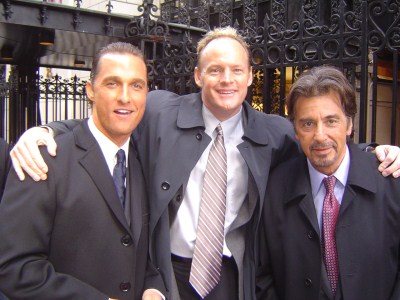 John Edmonds Kozma, head of Bang Productions, has reached an agreement to partner up with Brandon Lang, the man considered by most as the world’s greatest sports handicapper.  Arguably the most recognized name in the sports gambling industry, Lang’s life was brought to the big screen in the 2005 feature film, “Two for the Money,” starring Mathew McConaughey as Lang in addition to screen stars, Al Pacino, Renee Russo, and Jeremy Piven (directed by D.J Caruso).

Lang’s autobiography, “Beating the Odds, the Rise, Fall and Resurrection of a Sports Handicapper,” details his rags to riches to story from his humble beginnings as a child in Midland, Michigan to the big time of the Big Apple and Hollywood.  From his dad trying to kill his mother when he was ten years old to a rising athlete whose career was cut short due to a knee injury; serving his country in the Navy aboard the battleship New Jersey in the early 80s; and becoming the youngest master helmsman in battleship history, Lang takes you through his life in colorful detail and how a youth who had every reason to turn out bad grabbed success at every turn.

Walking away from the sports gaming career in 1995 at the top of his game, Lang arrived in Hollywood, California with a dream of turning his life in the gambling world into a movie.  He networked his way onto the Riviera Country Club as a caddy with the sole purpose of getting up close and personal with producers, directors and writers to pitch his story to in hopes of getting a movie deal.

Lang executed this game plan to perfection, caddying for screen writer Dan Gilroy four months later, pitching him his idea and finding success when Gilroy took the bait penning the script that ultimately led to the movie.   In his forthcoming book “Confessions of a Hollywood Caddy,” Lang talks about his seven years at Riviera caddying for the likes of President Clinton, Tom Cruise, Sylvester Stallone, Jack Nicholson, Mark Wahlberg, Wayne Gretzsky and Michael Jordan to name a few.

Lang has shot a pair of TV shows; the first is called “The Capper” for the USA network and the most recent, “Brandon Bets the World,” aired on the Travel Channel back in February and is currently being shopped around in Hollywood as a twelve-episode pickup in early 2011.

“I have waited five years to hook up with someone like John Kozma,” claimed Lang. “This is a dream come true.”    “Everyone in the sports world knows who I am,” added Lang. “It’s now time for the rest of the world to know who Brandon Lang is. John Kozma has the contacts in the entertainment world and in the media to help me reach my goal.”

As far as the plans with Bang productions, John Edmonds Kozma said, “People will be able to go to http://TheRealBrandonLang.com and for a fee, they can get a sports tip from Brandon or they can sign up for a month, two months and so forth.”  We will also have a ‘Millionaires Club” where members can have a more exclusive relationship with Brandon. In addition, we will air the ‘Brandon Lang Show’ on the site.” In the meantime football season is upon us and another chance for Lang to shine at his website.