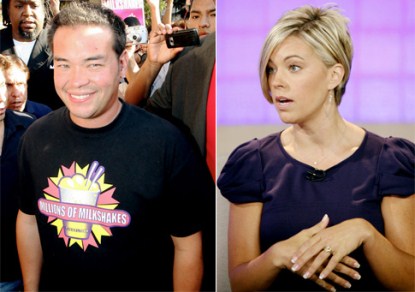 Apparently Kate Gosselin is a an unfit mom according to Jon Gosselin for leaving their 8 kids under the exclusive care of a 19 year-old nanny.

But it was Kate who went on the Today Show Wednesday and complained about Jon – saying she was hurt and angry – well boo hoo Kate – too bad so so sad – but Jon has a right to be pissed off.  Kate took off for the Emmy’s in August and then again in September for a photo shoot in Mexico and left the kids in the exclusive charge of Kassondra Morgan, Kassi as she is known.

Get this – Jon was not allowed to see the children during Kate’s trips nor was he allowed to talk to the nanny!!  Kate is a seriously nasty piece of work and totally selfish – I mean was she thinking of her children here in any way other than as a commodity she needs to control to keep getting rich off of?  This woman is a nightmare and we bet her kids will run form her as soon as they can.

Radaronline reports: “Jon was furious that she allowed somebody he didn’t even know look after their kids.  To make matters worse the children were not allowed to see their father during the trips and the sitter was instructed not to talk with Jon either.  “Naturally, Jon expressed his concerns that his kids were being left with such a younger person but Kate just dismissed these concerns.

So the windup was that Kassi quit her $24 per hour job after the trips due to the tension and in-fighting between Kate and Jon for which she served as a buffer.  Apparently she would call her friends crying bitterly over how miserably they made her feel.

In the end nobody has any respect for either Jon or Kate – he behaved like a playboy after getting famous and she turned into a nasty bitch with delusions of grandeur and fame – as if she has any talent at anything – NOT – including motherhood and parenting.