Lindsay Lohan Says My Daddy Is A “Pathological Liar” 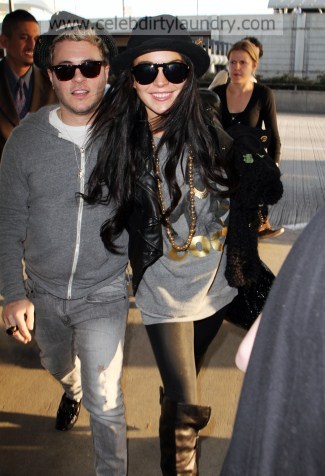 Lindsay Lohan says her dad Michael’s allegations she is addicted to prescription drugs are completely false and she is struggling to come to terms with his attempted intervention at her Hollywood apartment yesterday (22.04.10).

She tweeted: “pathological liar – a person who lies to the point of it being considered a disease or condition, an abnormally habitual liar = MY FATHER. (sic)”   Lindsay also took to her twitter page to praise her mother Dina for always being there for her and her siblings, Ali, 16, Michael Douglas, 22, and Dakota, 13.   She added in series of posts: “my mother is AMAZING! not ANYTHING like what Michael is saying. W/out her, i wouldn’t of been able to follow my dreams and be as strong as i am today. (sic)”

She also publicly told Michael – who went to the home Lindsay shares with her sister Ali with police officers – she does not want him in her life.   She wrote: “attention on his part&a public display of "reaching out" when we have stated that he is NOT a part of our lives, nor has he been for a while. as for our well being- he’s never cared about that before, nor does he now-never paid child support..10months now… (sic)”  Photo: Fame Pictures