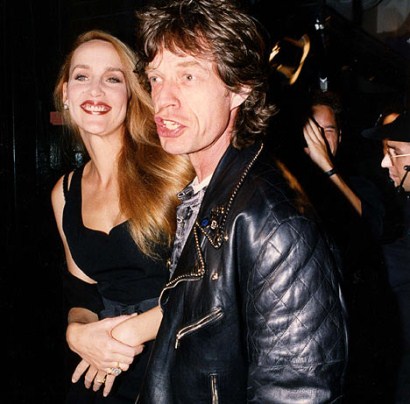 Sir Mick Jagger has been branded a “sexual predator” by ex-wife Jerry Hall.   The 54-year-old model – who started dating The Rolling Stones rocker in 1977, married him in 1990 and had their union annulled in 1999 – admits their relationship had many difficult spells where she believes he cheated on her after he replaced his drug problems with sex.

Discussing their early days together, she said:

“Although I loved him and he swore undying love for me, I felt very unsure of him. I had weaned him off drugs, but they had been replaced by sex.   “Mick wasn’t touring and had too much time on his hands. He started going out a lot without me. He would say he had a meeting and then call to say it was running late. He had been linked with several girls in the gossip columns, but he denied it, of course.”

Jerry and Mick wed in a Hindu beach ceremony in 1990, but the legality of their nuptials was debated and their marriage was later annulled at the ‘Satisfaction’ singer’s request, after it was revealed model Luciana Gimenez was pregnant with his child.   The model-and-actress – who has daughters Lizzie, 26, and Georgia, 18, and sons James, 25, and Gabriel, 12, with Mick – has also spoken out about her difficult childhood, where her father gambled away their family home before attempting to commit suicide.

She explained in her autobiographical photography book ‘My Life in Pictures’: “He detonated our entire existence. First, he gambled the house and farm away . . . Then, racked with guilt and shame, he tried to kill himself.   Unfortunately, he was no better at that than he was at poker . . . He succeeded only in breaking almost every bone in his body and losing a kidney, leaving Mama with five children to raise, no home, and a husband destined to spend a long time in hospital.”