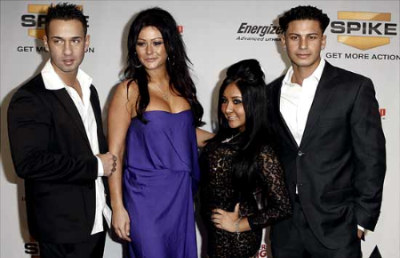 Perez Hilton posted photos of the cast of Jersey Shore getting their hair done and called the entire show fake.

His title? The Jersey Shore Is Staged! Snooki Doesn’t Even Poof Her Own Poof! The problem? He didn’t do his homework. Are you surprised?

Except it seems that even we have been duped! Turns out that The Jersey Shore is just as fake as the MTV reality shows that have come before it.

A Perezcilious reader sent us these shots of the cast filming in Seaside over the summer. As you can see, everyone is being primped and perfected by the show’s stylist – no one is getting their guido on alone. It wouldn’t be such a traumatic turn of events if we weren’t blatantly watching this hair whore put up Snook’s iconic poof! Girl can’t even be bothered to do that anymore!

MTV also has their say:

Oh, Perez Hilton. We normally consider you the great authenticator of gossip, but you made a really big boo boo when you posted pics from MTV’s official Season 3 photo shoot and wrote that the “Jersey Shore” cast had been getting all dolled up by hair and makeup pros for an actual filming of an episode. Dude, the show wrapped Saturday. Those pics of yours were taken Tuesday (that’s three days later FYI) … and we lucky online folks were even there to prove it!

That’s right, fans — no need to worry whether the series is true reality. We’d never attempt to trick 6.5 million viewers.

Anywho, before the whole “Jersey Shore” fam said ciao to their Season 3 digs in Seaside Heights, they all mugged for MTV’s cameras on the rooftop of their rental home and at the boardwalk arcade. Our reason for being on the invite list? To observe and report what was going down behind the scenes (and apparently, demonstrate that one blogger hasn’t been doing his homework). Check out our exclusive pictures of the cast blowing goodbye kisses to yet another debaucherous summer at the Jersey Shore.

Nice, classy way of putting things. Here’s what the Snookster had to say about the whole thing, on her Twitter: “@perezhilton You are outta your mind if you think i dont poof my own poof. Fake my ass….get real.”

I love it. I don’t even watch this show and I’m a fan of Snooks. Owned!