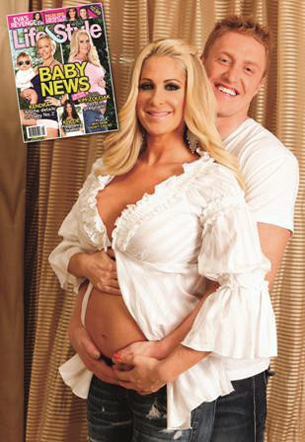 Real Housewives of Atlanta star Kim Zolciak, 32,  and Atlanta Falcons defensive end boyfriend Kroy Biermann,25, are pregnant.  Kim has been dating Kroy since May 2010.  Although Kim previously denied the rumors that she was pregnant because she was still in her first tri-mester.  However she has now she has now confirmed that she is three months pregnant.

“I was surprised!” Kim, 32, tells Life & Style about the pregnancy. “While it wasn’t planned, God clearly has a bigger and better plan for us and we’re excited.”

The pregnancy is not the first for Kim she has two other daughters from a previous marriage.