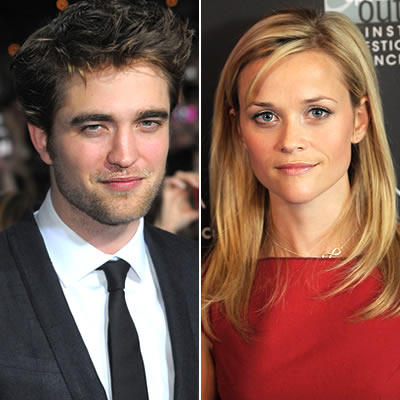 Reese Witherspoon who got up close and personal to Robert Pattinson during their filming of  ‘Water for Elephants’  was amazed at all the attention that Robert got.    According to  Reese women would camp out all day and all night it did not matter they just wanted to catch a glimps of Robert.   Our insider on the Twlight set told CDL exclusively that women actually fly in from all over the world to be near Robert.  One group of women came from Germany and got to be about a mile from the set and they were thrilled.  Reese compares the insanity surrounding Robert to when Leo DiCaprio was in Titanic.

Reese goes on to say –  “He is extraordinarily attractive. I’m not gonna lie,” she said.   “Robert is such a great guy from a great family,” she explained. “That’s the thing that’s so funny. He’s not really this bad boy; he’s just a great guy and really worked hard on ‘Water for Elephants.’  He really worked long hours, long days. He looks totally different in the movie.”

So what do you think?  Does Kristen Stewart have anything to worry about?