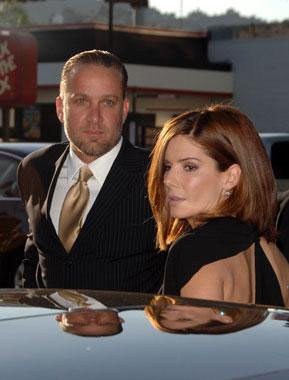 The motorcycle entrepreneur – who has been accused of cheating on the actress with four other women – is currently staying at the Sierra Tucson Rehabilitation Center, in Arizona, to be treated for “sexual compulsivity” and according to one former sex addict, Sandra’s support is crucial.   US writer Benoit Denizet-Lewis – who wrote about his struggle to overcome his urges in ‘America Anonymous: Eight Addicts in Search of a Life’ – told Orlando news outlet WESH: “For anyone in sex addiction rehab, if they are hoping to save their marriage and a lot of them are, the participation obviously of the wife or the partner is absolutely critical.”

Sandra, 45, is said to have visited the facility around 10 years ago to research her role as an alcoholic newspaper columnist in the film ‘28 Days’.   It costs between $40,000 to $64,000 a month to be treated at the centre – where a host of famous faces have allegedly been treated including Michael Douglas, Whitney Houston and Nicole Richie – which is located on 160-acre grounds.
Meanwhile, Sandra ventured out this week to visit a friend.

The Oscar-winning actress was spotted at the Beverly Hills home of Gabriel Brener – the head of private investment firm Brener International Group, LLC – on Wednesday (31.03.10).   A friend of ‘The Blind Side’ star told People.com: “She’s not there on business. They’ve been friends for decades. She spends a lot of time at his house.”   Gabriel and his family were guests at Sandra and Jesse’s wedding and the Hollywood beauty has holidayed with the family on several occasions.