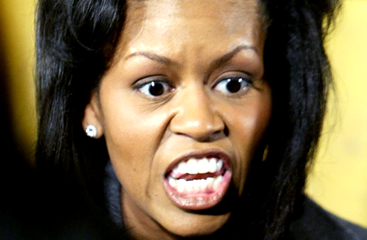 If it weren’t so disgusting it would be funny.   Imagine a time in the USA when someone makes fun of a subjectively ugly picture of the president’s wife and consequently receives death threats and is labelled a racist. Well the time is now and the victim of intolerance is Scott Baio.   He dared to laugh at the Empress – that’s right he laughed at Michelle Obama and he made a joke about her.   How absurd to label someone racist because he posted an unflattering photo of Michelle and poked fun at her and, by association, her husband.   And for this his life is threatened?

This reminds me of the furor surrounding the Danish cartoonist who drew a picture of Mohammed making fun of Islamic Terrorists and this set off violence which still stalks the cartoonist. As recently as last week his house was invaded by a man seeking to kill him for daring to draw Mohammed.   Do we see a parallel here?   Have we reached the self-contradictory point in our national evolution where as a population we are progressive enough to elect a Black man President and yet intolerant enough to threaten and censor someone for making fun of the President’s wife!!