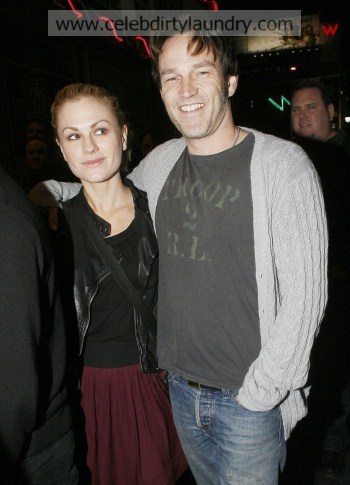 The ‘True Blood’ actor – who got engaged to his co-star last August – claims staff at network HBO tried their best to bring them together by booking them into the same hotel during filming of the pilot episode.  He said:

"They put us in the same hotel – though in not the same room to begin with.  "No, I’m joking. They put us in these hotel suites, and we hung out for a while and got to know each other. The attraction was there, so it was a matter of whether we acted on it or not."

While he is blissfully happy with 27-year-old Anna, Stephen – who plays vampire Bill Compton in the show – admits he was reluctant to get romantically involved with her at first in case it destroyed the future of the programme.   He added in an interview with Details magazine:

"To get a pilot that runs to a series, it’s big s**t to people. And so to come along and go, ‘Oh, let’s have a quick f**k’ and then risk arguing and being a nightmare when you’re playing the two people who are together the whole time – that would be immature."

Stephen, 40, has been dating Anna – who plays Sookie Stackhouse – since 2007 but insists they won’t marry “until at least 2020.”  Photo: Fame Pictures