The Situation is Bleak – The New “Cool” Drink – Vodka and Protein 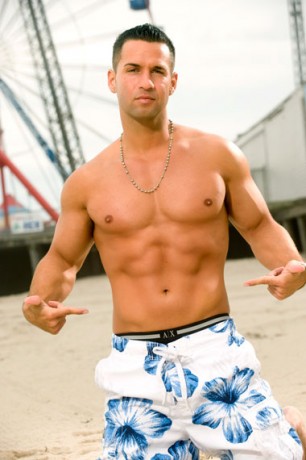 “The Situation” from Jersey Shore got a $400,000 signing bonus for agreeing to be the spokesman for the “Devotion” vodka company.  They make a special drink especially for morons that contains vodka and protein.

Yes, that is right, vodka and protein – the protein is known as casein which is found in milk products – so this way morons can be under the illusion that while they poison their bodies on cheap vodka they are nourishing their muscles with a nice protein shake.    Now we are dealing with a Jersey Shore type audience – in other words a bunch with very limited intellectual abilities and a terribly thin grasp of nutritional science so they might just be stupid enough to believe that they will develop that buff look while swilling vodka.  Michael “The Situation” Sorrentino is a pathetic excuse for a man – and an absolute nothing as a bodybuilder.    He has some muscle, nothing big or very nice and what he does have looks as though it were stuck on – a sure sign that The Situation is taking steroids.

The Situation used to be an exotic dancer – another term for a stripper – his parents must be so proud!  Anyway, you can count on seeing the lower echelon of young people carrying Devotion around with them – just like back in the 90’s you could spot a moron by noticing the Seagram’s Gin and Juice he was toting after Snoop Doggy Dogg and Dr. Dre came out with that remarkably stupid song, “Gin and Juice.”  All of a sudden every gangster wannabe both from in the hood and in the suburbs was drinking Gin and Juice like it was the thing they had always loved and in had in fact been suckled on.    There is nothing more pathetic than a youth trying to be cool except one trying to do it drunk.