Vampires Are The New Sexy – From Bela Lugosi to Alexander Skarsgard 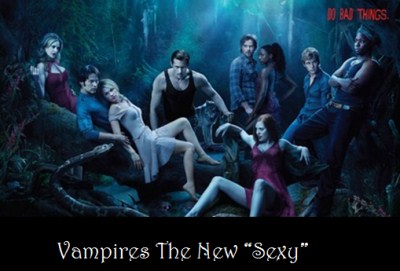 The latest fad in entertainment – bordering on a craze – is of all things vampires. Always popular to a greater or lesser degree since Bram Stoker penned Dracula in 1897, today we see a resurgence of the vampire’s popularity. In fact, interest today in vampires is greater than at any time since its heyday with the Bela Lugosi film Dracula in 1931. All signs are that this vampire fad is growing and has yet to reach its peak.

Vampires, Vampires, Vampires. What is it? Why are we so fascinated? From the piercing eyes of Barnabus Collins to the devilish charm of Spike, what makes us keep coming back for more? Who didn’t want to date Angel or go home with Edward Cullen? And now with HBO’s hit series True Blood making the cover of Rolling Stone magazine and garnering critical acclaim for its screenwriting, acting and directing, we seem to have reached the apex of the vampire genre. Furthermore, we dare say that standing out in a cast including some very appealing people, Alexander Skarsgard is probably the most attractive man today on TV or film.

It is by no means simply the horror of sucking the living blood from victims – there is a sexual mystique with certain sado-masochistic overtones surrounding the vampires stalking and preying on their victims. When True Blood’s Southern gentlemen/vampire Bill Compton consumes Sookie it is with a passion so strong that women swoon and wish, at least surreptitiously, that they were in her place.

Amongst the reasons vampires are so increasingly popular is their power – the vampire is dark – he is a creature of the night – and he threatens intimacy. He can bend your will to his, he can consume you – you love the vampire – you feel a great deal of lust for him and at the same time you fear him. He calls you from afar – his soul and yours are bound up together – he flies in the night and he comes and sucks your blood… it can border on the orgasmic – you have no choice but to truly give yourself to the vampire. Below are the changing faces of screen vampires over the years. 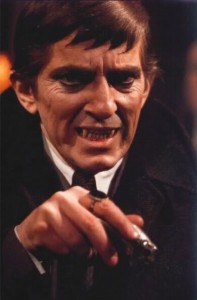 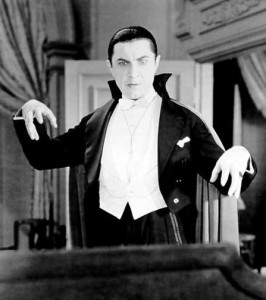 Barnabus Collins (above left) played by by Canadian actor Jonathan Frid, is a 175-year-old vampire who is in search of fresh blood and his lost love, Josette. Barnabus was on Dark Shadows, which aired from 1966 to 1971, though originally only scheduled for a 13-week run. The show was very popular and to this day, has a fervent fan base. Currently, Tim Burton and Johnny Depp are collaborating yet again to bring this series back to life and to the big screen. If they do Johnny Depp who is a big fan of “Barnabus Collins” will play the lead role of Barnabas.

The original Count Dracula (above right) was played by Hungarian stage and screen actor Béla Lugosi. Through his association with Dracula (in which he appeared with minimal makeup, using his natural, heavily accented english), Lugosi found himself typecast as a horror villain in such movies as Murders in the Rue Morgue, The Raven, and Son of Frankenstein for Universal, and the independent film White Zombie. 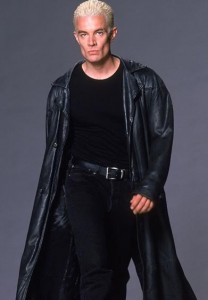 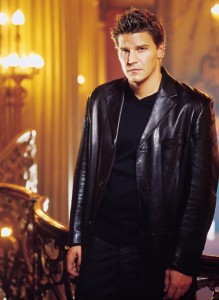 Spike (above left) (a.k.a. William “the Bloody”), played by James Marsters, is a fictional character created by Joss Whedon and David Greenwalt for the cult television series Buffy the Vampire Slayer and Angel. Spike is a vampire who enacted various roles on the shows, ranging from villain to comic-relief to anti-hero.

Angel (above right) played by David Boreanaz in the popular spinoff, details the ongoing trials of Angel, the vampire whose human soul was restored to him by gypsies as a punishment for the murder of one of their own. After more than a century of murder and the torture of innocents, Angel’s restored soul torments him with guilt and remorse. 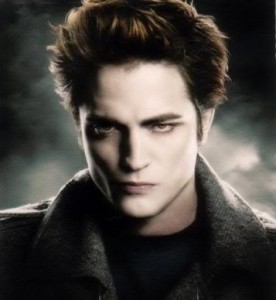 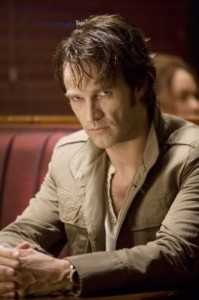 Edward Cullen (above left) played by actor Robert Pattinson in the Twilight film saga. Edward is a vampire who, over the course of the Twilight series, falls in love with, marries, and has a child with Bella Swan, a human teenager who later chooses to become a vampire also. 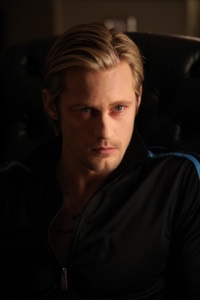 Eric Northman is played by Swedish actor Alexander Skarsgard. Eric was created by 2000-year old Godric with whom he shares a deep bond of loyalty and devotion. In Season 2, Godric commits suicide by exposing himself to sunlight, causing Eric to shed bloody vampire tears, which is out of character for the otherwise steely cool, debonair and tough 1000 year-old vampire. Eric was a Viking when human and his father, the king, was killed by the arch villain vampire in Season 3, Russell Edgington. Eric’s seeking of revenge for the murder of his family plays a central role in the plot of True Blood’s current (3rd) season.

True Blood may be at the height of the vampire popularity and one reason is certainly the graphic violence and sexuality of the show. Creator Alan Ball seems to grasp the intrinsic ties between the bloodletting and the lust that intertwines the vampire/human relationship. With each progressing season,  we have seen the tone of the show become more overtly sexual, with greater nudity, intense scenes of violence, gore and lust display sometimes simultaneously.

There are True Blood scenes shown on TV far more graphically sexual and/or violent than those on the vast majority of Hollywood films. This sexuality and violence combined with very clever – sometimes brilliant – screenwriting and a wonderfully talented cast assures True Blood a long run at the top of the fang-baring set.

Combined with the success of the Twilight series, we can expect more films with the vampire theme coming to both the small and big screen. This Halloween count on seeing all sorts of little and not-so-little vampires ringing your bell.

Article first published as Vampires Are The New Sexy – From Bela Lugosi To Alexander Skarsgard on Technorati.