Most people live their lives in relative obscurity and unless they commit some heinous act, their chances of becoming famous, infamous, or a household name is minuscule.

This attempt to gain the spotlight has been cited as a motivation for some famous criminals – people like Mark David Chapman (John Lennon’s killer), John Hinckley Jr. (attempted to assassinate Ronald Reagan), and Charles Manson (responsible for multiple murders including that of actress Sharon Tate) were all frustrated failures whose primary goal in committing their crimes was to be “known” and to become “superstars.”   What about the reverse?

What about people who are big-name stars and then commit really serious crimes turning their lives from glorious luxury and privilege into that of the lowest elements of society – dwellers of the penal system? 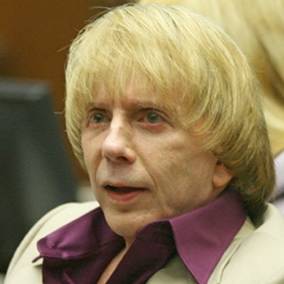 At first blush you might think that this never happens but let’s take a look… . The first candidate that comes to mind is the incredible music producer and convicted murderer, Phil Spector.   Apart from developing the “Wall of Sound” musical production technique which was wildly popular and successful in the 60’s, Phil discovered and produced the first punk band, The Ramones.   He worked with such luminaries as John Lennon, George Harrison, Ike and Tina Turner, and Leonard Cohen producing some of their most successful record albums. But sadly, Phil tended towards obsessive privacy and reclusion eventually falling into what can only be termed as pathological behavior when he shot and murdered a woman he’d just met, actress Lana Clarkson in 2003.  Phil and his defense team claimed it was a suicide, then an accident, but eventually the court saw through his defense and convicted him of second degree murder sentencing him to 19 years to life. These days Spector lives in the California Substance Abuse Treatment Facility and State Prison in Corcoran where he will turn 88 before becoming eligible for parole.   Wow – what a screw up! Us ‘normal’ people wonder what would make such a successful man, a man with the world on a string, turn his life into a nightmare by murdering his girlfriend? 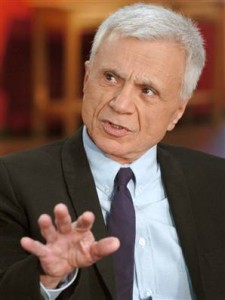 Next we have Robert Blake – an extremely gifted actor who played the unforgettable if somewhat ironic role (as the events of his later life show) of Perry, the stone cold killer in In Cold Blood the 1967 hit film based on the bestseller by Truman Capote.

Robert Blake went on to play the starring role in the TV series Baretta and was enjoying what appeared to be a peaceful retirement, albeit with some problems in his marriage.   A woman whom he got pregnant and then married, Bonnie Lee Bakely, was always taking more money and fooling around on him.  Eventually Blake grew tired of her manipulations and solicited to have her murdered. Blakely was a notorious gold-digger and famewhore, (the FBI knew her to send naked pictures of herself to celebrity men and promise to marry them if they sent her money – which amazingly they often did!) also had a torrid affair with Marlon Brando’s son Christian.

Blake and Bonnie were eating in a diner together when it appears that Blake tricked Bonnie into going out to their car where she was gunned down. Investigation showed that Blake had set up the hit although he was acquitted of the murder after spending nearly a year in jail. He was however convicted of a wrongful death in a civil suit and ordered to pay $30,000,000 – he appealed and was convicted again but the settlement was cut to $15,000,000.   He was also found guilty by the state of California on tax charges and ordered to pay over $1,000,000 – eventually poor Blake filed for bankruptcy and currently lives a very quiet and reduced existence – but at least he is free.   All objective evidence is that Blake is definitely guilty of murder and solicitation of murder. 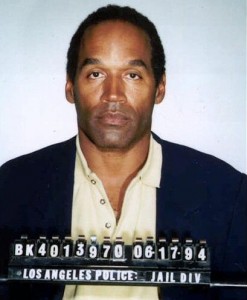 Finally we have O.J. Simpson – the unforgettable NFL running back, actor, and murderer – who murder case has been dubbed the crime of the century.   The OJ case has been documented to death (okay bad pun), but to make it brief, it seems that a coked up, jilted, and frustrated Simpson murdered his ex-wife Nicole Brown Simpson and her friend Ronald Goldman in a late night struggle at her house.

By all accounts, OJ was guilty, but a combination of poor prosecutorial technique and racial considerations directed against the LA police on the part of the jury allowed him to walk free.   Such a miscarriage of justice has rarely been seen in the U.S. OJ was convicted of wrongful death in the civil suit and ordered to pay over $46 million dollars!   Being the rat that he is, he managed to make it very difficult for the Goldman’s to collect their $33,500,000 share by hiding his assets

The greatest irony occurred when Simpson the brutal bully used strong arm tactics and kidnapping in an attempt to regain some property he felt was his, that was being sold at a sports memorabilia convention in Las Vegas.   Thankfully he was convicted of a variety of charges and now sits in jail for a minimum of 9 years before being eligible for parole – he could be inside for up to 33 years and we seriously hope he is.

A man like this who murders his ex wife out of pure malice and jealousy does not deserve to live amongst us and his later violent behavior over property proves that he is a danger to society and that the previous murders were not isolated incidents but reflective of his true character.

Here we gave 3 extreme examples of people who had everything to live for, but ruined their lives by extremely selfish and callous behavior – it seems that being a big star for these people allowed them to feel that they were truly above the law and not bound by normal rules of conduct.   If these people had not been stars would they have still committed the crimes that ending up destroying them? Or did the delusionary world of stardom – being surrounded by sycophants all of the time – encourage behavior to develop that was pathological and sociopathic?

One trait that characterizes all three murderers is their lack of remorse and absence of any apparent sense of wrongdoing on their parts. Did stardom doom these men to follow a destructive path on which the former success and the adulation they enjoyed were not applicable?   Note that all 3 killed their wives or paramours, and details of the cases show that all 3 women were not obeying the stars, not giving in to their demands. Could it be that these spoiled stars simply could not bear being disobeyed and were willing to go to any length in order to come out in control of the relationship?    We think the answer is a horrible and frightening “YES.”

Article first published as When Bad Things Happen to Famous People… on Technorati.