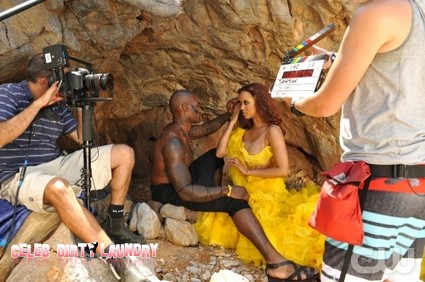 Tonight is a whole new episode of America’s Next Top Model All-Stars and the competition is getting fierce we are down to the final four all-stars.  Stay tuned as we cover the official recap of show with up-to-the-minute details .  On last week’s episode it was not a new show and rather they did a rewind and reviewed the challenges, photo shoots and dramatic personalities that make up the All-Star cycle of “Top Model.

On the last elimination episode Dominique, 27, from Columbus, Ohio was sent home. I was surprised by the elimination last week I expected Angelea to go home.  She needs to learn to control her temper and if she does not she won’t have much of a career.  If you missed the last episode you can read our official recap here!

Episode synopsis: THE ALL-STARS BECOME BLOGGERS – It is down to four women and the competition is intense. The All-Stars have to write a fashion blog for Editor-in-Chief of Vogue Italia, Franca Sozzani and also get the opportunity to work with Tyra on a motion editorial. André Leon Tally and Nigel Barker join guest judge Tyson Beckford and Tyra Banks on the judges’ panel for the elimination.

The four remaining All-Stars are Lisa D’Amato, Allison Harvard, Laura Kirkpatrick and Angelee Preston.   Do you have any favorites?  I am rooting for Lisa and Allison!

Tonight’s Episode: Lisa is talking about Angelea’s emotional outburts and thinks they have not seen the end of them.  When they get back to the house Laura’s photo is up because she won best picture.  Laura is thrilled because she feels she is back and she is proud of herself.  Lisa thinks Laura is her biggest competition but is not too worried because she does not have as much experience as her.

The girls go to meet Nigel Barker.  The girls are going to be auditioning for their future boss Editor-in-Chief of Vogue Italia, Franca Sozzani.  They have a challenge – They have to write a style blog about Crete and fashion.  The girls have to pick an outfit go with a driver take some pictures one of the pictures has to have them in it.  The winner of the challenge gets a trip back to Crete for seven days with a friend.

Nigel comes to get the blogs which he is going to go over with Franka Sozzani and they will choose the winner.

Tyra mail – the girls are heading to a photoshoot, they meet Mr. Jay.  The girls are going to be directed in a motion editorial by Tyra Banks.  Tyra is working on her first novel Model Land and they are bringing it alive in this motion editorial.  Every one of the girls will be playing the lead in the book a different way.  They will be shooting for two days.  Each of the girls get their own personal scene. There were many, many scenes and the girls were going a bit crazy.  Angelea broke down during the photoshoot and Lisa thinks she is too fragile to win.

Nigel calls Franca to go over the girls and how they did with the their style blog.  Franca says it is a difficult decision to make.

Lisa loved the first day of shooting and is not upset they have to do a second day.  Nigel comes in too tell them who wins the challenge.  Franca liked Laura’s blog but did not think ti was gripping enough.  Alison she thought her blog was too short.  Angelea she liked the way she talked about fashion and herself.  Lisa she really liked her blog and felt her personality.  But only one person can win and the winner is Angelea.  Lisa is shocked.  Angelea is thrilled she has won an individual challenge.

The girls head back for the second day of filming and they find out that Tyson will be in the photoshoot today.  The girls are excited and think he is beautiful.  Tyra tells Tyson they are going to do some crazy things.  Tyson waves a flag and the girls have to run.  They are filming the reveal for the winner of America’s next top model today and the girls are excited.

The girls get back home and find out they are going to panel!   Angelea feels the girls underestimate her and she is going to win the competition.  Laura really wants to win and Alison is frightened she will be voted off tonight!

Angelea – they loved her in the editorial, they thought she was stunning.  Nigel loved her when  they do the emotional parts.  She came back after a poor performance last week.  She is potentially a time bomb that is the problem.

Laura – Tyson felt she did a fabulous job as an actress.   Nigel thinks she engaged the camera sometime.  Lisa is very much Apple Pie and people will identify with her.  She always commits.

Alison – Nigel is very impressed with her.  Tyson disagree he felt she could not find the camera.  Tyra feels she has to find out what to do with her eyes.  She is not personable and unusual.  Alison was the most visually stunning.

Lisa – They think her running was great and her acting was superb.  She has to work on the fact she sometimes commits so much she forgets she is an actress.  Lisa has talent she can perform.

The judges cannot make a decision and spend most of the time bickering about who they want to be eliminated.  This is the first time the judges cannot agree on a person to eliminate.  Finally they decide!

Best in the editorial – LISA – FINALIST

The three finalists are Lisa, Angelea and Alison.

What do you think?  I am disappointed, I think Angelea should have gone home, she has a bad temper and needs to learn to control it.  Let us know your thoughts.  Sound out in the comments below!