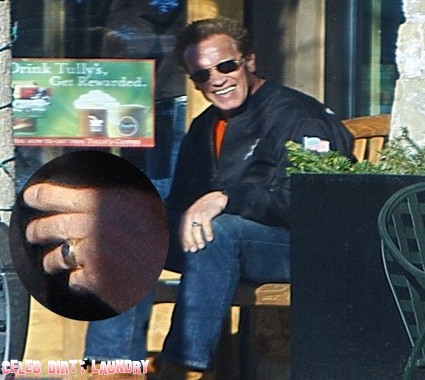 Arnold Schwarzenegger has been spotted wearing what his wedding ring and this probably means that he and Maria Shriver have reconciled. In photos published by the Daily Mail, Schwarzenegger can be seen sitting outside a cafe in Idaho wearing a gold band on his left ring finger.

Arnold continued to wear his wedding ring in the immediate aftermath of the split, but has been spotted without it in the last few months. The photographic evidence follows reports earlier this week that Arnold and Maria Shriver spent Christmas together – feeding the rumor mill that says the power couple might be getting back together and cancelling their divorce.

Although Maria filed for divorce on July 1 Arnold has been trying to worm his way back into her good graces by showering her with kindness and gifts. Arnold and Maria separated after 25 years together in May but put on a united front over the festive period for their four children, Katherine, 22, Christina, 20, Patrick, 18 and Christopher, 14.

What works in favor of reconciliation is that divorce is forbidden to Maria as an ardent practicing Roman Catholic. Looks like Arnold just might have dodged the bullet this time.