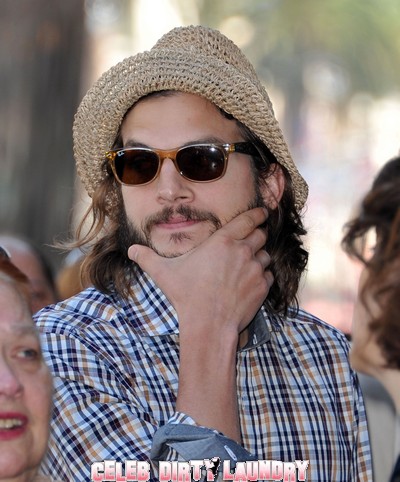 Ashton Kutcher‘s behavior is getting dangerously close to that of last ‘Two and a Half Men’ lead actor, Charlie Sheen, with his desperate-looking release of a live video. A haggard looking Ashton can be seen and heard rambling on about the “state of honesty” and the “state of truth” in the media, or lack thereof.

He neither specifically references his reported infidelity nor the subsequent rocky road his marriage to Demi Moore is taking. He definitely doesn’t talk Sara Leal’s extremely believable claims of her sexual affair with him. Nevertheless its fairly obvious what is bugging Ashton – and that is that the media is basically ruining his marriage if not his life!

Of course it would never dawn on pompous Ashton that his own behavior is at the root of his troubles.

Sporting a baseball cap and a beard, a soft-spoken Kutcher appears on camera and launches into a discussion about how the cost of printing meant that those responsible for printing had to be extremely judicious in what they chose to publish. Ashton tries to draw a direct relationship between the cost of paper and the likelihood of honest reporting – but maybe he should be more concerned about the cost of divorce.

“Because publishers had a limited amount of inventory, they held great scrutiny over what they would be willing to print,” Kutcher attempted to explain. “They were, sort of, the gatekeepers of the truth.”

What does this have to do with, well, anything? He’s getting to that. Kutcher goes on to say that, because blogs and Twitter accounts and other social media essentially allow people to publish for free, there are no longer any “gatekeepers” to the truth.

“People can essentially bastardize the truth and spread that around the world,” says Ashton.

Well Ashton – you bastardized the accepted rules of marriage – so now you must expect to ‘enjoy’ the fruits of your follies.