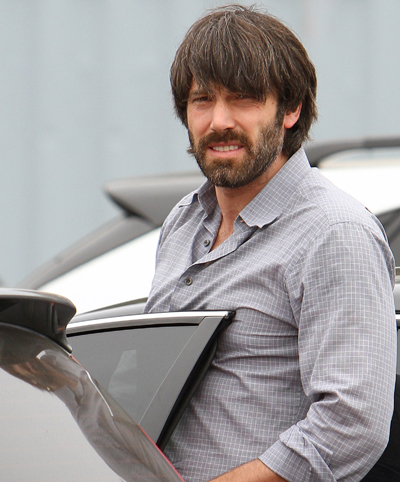 Like regular folks, celebrities aren’t immune to making bad decisions as teenagers and getting questionable tattoos. Case in point: The Town star Ben Affleck, who has been sporting a Jesus-like beard for the past few months, was recently seen showing off a never before-seen dolphin tattoo on his lower back.

Photographers got a glimpse of the 39-year-old’s “tramp stamp” as he walked around LA with his pregnant wife Jennifer Garner and their two daughters, Violet and Seraphina, this past weekend.

According to TooFab.com, Ben, who will direct and star in the upcoming film Argo, might have gotten the ink in order to cover-up a high school girlfriend’s name.

Still, while we expect these kind of shenanigans from the likes of Miley Cyrus and Megan Fox, both of whom are said to be trying to laser off some of their teenage-era tattoos, it seems funny that the former action star would choose such an adorable sea mammal to adorn his back.

Ben also has three, slightly more manly tatts — a barb wire on his bicep, some roman numerals on his shoulder, and a cross on his left arm.