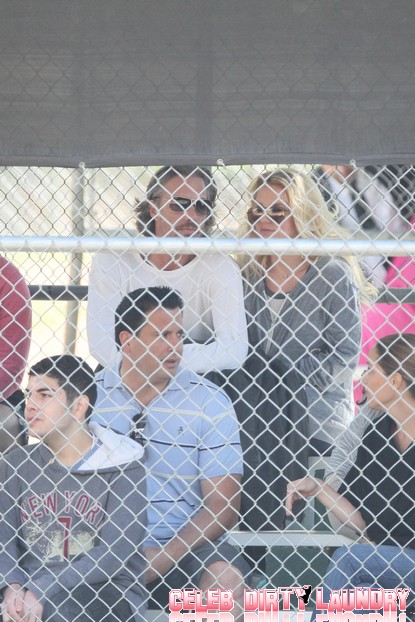 Femme Fatal singer Britney Spears, 29, and boyfriend Jason Trawick watch her adorable son Sean Preston Federline play little league softball coached by his dad Kevin Federline in Calabasas, Los Angeles, California on May 15th, 2011.  Proving although they ended their marriage years ago they can still all be civil for the children’s sake.  We have some adorable pics of Britney, Jason and Sean Preston for you below.  Don’t you think Sean is adorable?

Meanwhile, Britney hosted the annual Wango Tango music festival with Ryan Seacrest yesterday (05/14/2011).  The performs included pop and hiphop and included Ke$ha, Jennifer Lopez, Pitbull, Ne-Yo, Selena Gomez, “Glee” ‘s Matthew Morrison, Lupe Fiasco, T-Pain and a whole lot more.  The media room went nuts when Britney arrived looking sensational in a red geometric bandage print dress by Herve Leger.  She teamed the outfit with black YSL boots.  Britney worked the carpet for a few moments while all of the cameras in the room were pointing at her.  Britney does not have to perform to cause a sensation.  Enjoy the picture below!