Chef Robert Hesse to Save Restaurant 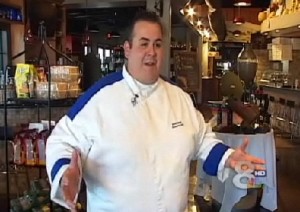 Last week Hell’s Kitchen’s Chef Robert Hesse found himself in a “Kitchen Nightmare” of his own.  He came to work to find his restaurant “Pssghetti’s Italian Market and Restaurant” in Clearwater, Florida closed.  The owner had other businesses in bankruptcy, and the courts seized the viable ones to help pay off debtors.

This caused the employees to miss their last paychecks, and put almost 30 employees looking for jobs.

Hesse is no stranger to a challenge, stepped up to take over the restaurant and make it bigger and better than before, and pay his employees what they earned.

Obtaining the restaurant from the bankruptcy court will be a daunting task, but it’s something Chef Hesse is willing to fight for.

“I want this place to stay open,  I believe in this place and my ability to make this thing right.  I want my loyal patrons to come back, and my employees to make this place bigger and better than before” says Hesse.