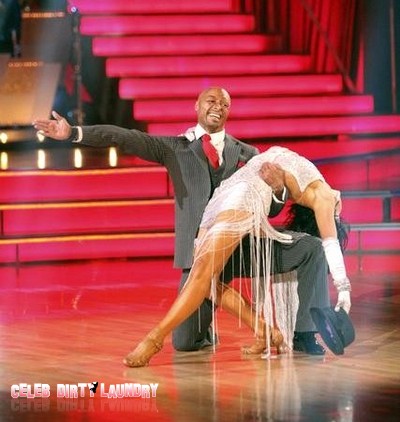 On tonight’s tenth episode and the part one of the finals of Dancing With The Stars couples will have to impress the audiences with two routines.   The first number is a dance style each of the couples have not yet performed.  J.R. Martinez chose to perform the  Cha Cha.  If you missed tonight’s performance show you can read our official recap here!  If you missed JR’s performance of last week you can see the video of it here!

J.R. who oddsmakers are giving a 1/2 odds to win has said he’s going to be ‘fearless’ Monday night. ‘I’m going to be a risk-taker,’ said Martinez who dances with Karina Smirnoff. ‘Because I want the ballroom judges to be like, ‘Wow!”  A worry tonight for fan’s of J.R. is if his ankle is going to hold out.  J.R. injured his ankle and it he appeared to re-injure it last week during the semi-finals.  Len came to coach JR and we foudn out from JR’s x-rays he did not break his ankle and the doctor told him he could perform.

Carrie Ann said: The magic of JR everyone loves you, they just fall in love with you.  But I think your musicality was off.  Len said: It was brave that you did the solo.   When you dance with a professional you can keep on track.  JR it was not that good.  Your enthusiasm got the better of you.  Bruno said:  I liked the mood you set, the intensity was right on and the latin feel was there and the character was there.

Check out the video below of his Cha Cha performance and let us know what you think?  Do you think he will be in the final two?  Sound out in the comments below!