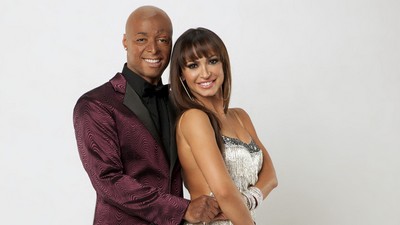 Enjoy JR Martinez’s Paso Doble & Argentine Tango Performance Videos.  On tonight’s ninth episode and the semi-finals of Dancing With The Stars couples will have to impress the audiences with three routines.  The competition is nothing short of intense tonight, with everyone wanting to get into the finals.  If you missed tonight’s show you can read our official recap here!  If you missed JR’s performance of last week you can see the video of it here!

The dances J.R. Martinez and professional dancer Karina Smirnoff will be performing are the Paso Doble to Spanish Tango by James Horner, Argentine Tango to Bust Your Windows by Jazmine Sullivan and Cha-Cha.  In the relay Cha Cha JR will be performing third.   JR said about performing three dances, “You already think about how hard it was — we had one dance, then you think about when we started having two dances, now you’re thinking about adding another dance to five days.  You have to do three routines in five days. That’s pretty intimidating for everybody.”

JR is a frontrunner in the competition as he proved last week, when he earned rare perfect scores on two dances.  If you want to vote for JR his voting number is 1-800-868-3410.

JR’s Paso Doble – Judges comments – Bruno said: I can really feel the thrill and excitement of the chase the role playing was great. The posture was not quite there. But the performance was good. Carrie Ann said: I give you so much credit for attacking the performance like that with a sore ankle. I believe your posture really suffered. Come back strong with the other dances. Len said: For me this dance did not suit you at all. It was more zero than zorro. You were too hunched over. The man is suppose to dominate. I feel with you because of your injury.

JR’s Argentine Tango – Judges comments – Bruno said: You were strong, fearless, for a man to try those list was incredible. Great job! Carrie Ann said: When you were dancing there was like there was a true fire between you both. The lifts were difficult and you commended it. Len said: It had mood, that is the way to go come back strong well done!