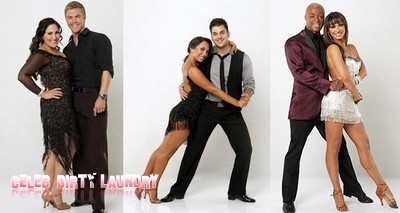 After ten weeks of exciting performances and shocking eliminations the Dancing with The Stars finale has arrived.  The couples will hit the dance floor vying to win the mirror ball trophy and be crowned the “Dancing with the Stars” champion.  The finale will be completed in two nights, Monday and Tuesday. The first night will air Monday, November 21 from 8 to 9 PM.  The second night will air Tuesday November 22 from 9 to 11 PM and on this night the actual winners will be announced.

On Monday the remaining couple will perform two dances.  The first number is a dance style each of the couples have not yet performed.   The second dance the couples will perform is  the always popular Freestyle dances.

On Tuesday the three finalists perform their favorite dance of the season. The two couples with the highest combined fan votes and judges’ scores will then go on to perform the Instant Samba to determine who will reign as champions of “Dancing with the Stars” and take home the coveted mirror ball trophy.

Since the finale is two hours on Tuesday, there will be time for each of this season’s 12 couples to return to the dance floor for a special performance.

Lady Antebellum comes to the ballroom for the television debut of “Dancing Away with My Heart” off their new album, “Own the Night,” accompanied by Troupe members Sasha, Teddy, Kiki, Sharna, Dasha and Oksana on the dance floor. They’ll then perform their megahit “Need You Now,” accompanied by “DWTS” pros Kym, Dmitry, Peta and Val.

Who are you rooting for? Let us know in the comments below!  We will be live blogging the show tonight with all the up-to-the-minutes details, so make sure to come back at 8PM!