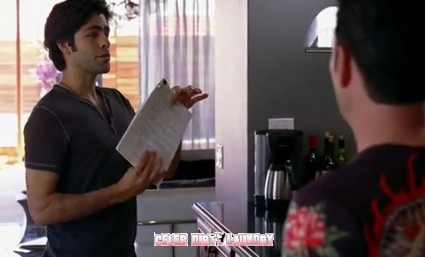 Last week Entourage began its eight and final season with a bang.   Vince got out of rehab for his substance abuse and Drama is cleaning out the house of any drugs.   Ari and his wife have split and Ms. Ari is dating someone else.  Sloan returns Eric‘s $30,000 engagement ring my mail much to the displeasure of Eric.  Vince wants to make a movie out of an idea he came up with in rehab all the guys are against it but Vince is determined to do it.  If you missed last week’s episode catch our RECAP HERE.

So let’s get started with tonight’s RECAP.  The show starts tonight with Turtle and he is telling Eric he likes Hotel living.  Eric says ya when you don’t pay you do.  Drama comes in dressed with a shirt with flames all over it.  They are all living in a hotel because the place they formerly lived burned down.

Vinnie walks in and hands them a script he says it is Drama’s movie he wrote it because he could not sleep.  The guys are reading it and Eric is complaining about Vince’s spelling and grammar.  Vinnie is getting Billy Walsh to help fix the script.  Vinnie says the idea is important not the spelling errors.

Sloan calls Eric and says ‘Hey Eric F*ck you’   Drama asks if someone can really get that mad over socks left at their house.  Drama tells Eric to get his shit out of Sloan’s house fast.

Over at Ari’s Lloyd is laying in wait.  Ari asks Lloyd if he is pregnant.  Ari tells him he will pay for the Lipo.  Llyod wants to be the new head of TV.  Lloyd tells him he has something else to tell him, he was meeting a prospective client in a restaurant and Ms. Ari was there.   Ari says impossible, she does not like that restaurant.  Ari tells him to come they are leaving the office and going to find out who convinced Ms. Ari to go to a restaurant she did not like.

We are over at the studio where Drama is working with Andrew Dice Clay.  Vince comes to see Phil and he tells Vince his brother had a problem and if he needs someone to talk to he is there.  Phil tells Drama they are testing the show that afternoon.  Andrew Dice Clay asks if he can go he wants to see what people like.  Phil says yes they can come.

Andrew wants to talk to Drama and tells him it is cute how he and the guys (Vinnie, Turtle, Eric etc) are all friends.   Andrew is telling Drama he needs representation and Drama asks Eric if he can sit down with Andrew Dice Clay.  Eric says he is too busy but he can meet Scott. Andrew gets upset cause he thinks Eric is passing him off.

Turtle calls his girlfriend she is not answering his calls.  She is in Miami a girl in the office Abby tells Turtle she spoke to her and Turtle is a little upset.  Turtle asks the Abby if when she talked to Alex she was upset, she answers NO.

Over at the office Andrew Dice Clay is with Scott.  Scott is asking what he is afraid of and Andrew says I am afraid of being F*cked.  He tells Scott he needs someone to have his back.  Scott tells Andrew he is a big fan and wants to sign him.

Over at the hotel Billie is reading the script and Vinnie is trying to get him to say something.  So Billie scream ‘I like it’  Billie says if I had said it sucks it would hurt you.  Vinnie asks does it suck and Billie says some of it but Billie can fix it.

Ari calls Ms. Ari’s sister and asks if his wife is F*cking a waiter.   He asks her who she is seeing and she won’t tell him.   She tells Ari that she has some guy at a restaurant but she is too embarrassed to tell her who.  Ari decides yes she is F*cking a waiter.  He screams for Lloyd and tells him if he wants to be the head of TV he has to get everyone to be mean to the waiter on the set of Mad Men where he is auditioning.   The waiter is a wanna be actor.

We cut over to Sloans and Eric and Sloan are in bed.  Then he is with the guys and he is telling them about it.  They asked how they left it and Eric said she just got up and left.  Turtle walks in and tells them he is going to break up with Alex.   She called Abby and did not call him.  Drama says maybe she is a lesbian.  Drama asks Turtle if he dated Tony Soprano’s daughter.

Phil walks in and says he got the scores from Drama’s new show and said they were through the roof.   They are telling Drama once the movie is finished (Vinnce’s Miner one)  he may have 2 Emmy nods.

Andrew wants to talk to Drama and he is thanking him for the gig on Johnny Bananas.  Andrew is telling them the deal they got sucks and they should walk off the set.  Drama is like what the show has not even started.  Drama tells them he wants to talk to his people (Eric and Vince)

Over to Ari’s office and Ari’s wife walks in and she looks like there is smoke coming from her ears.  She is pissed.   Ari comes out and asks what is going on.  She tells Ari her sister is upset and she tells Ari they are separated and to mind his business.   Ari asks if she is really f*cking a waiter.  She wants to know if Ari ruined the waiter’s audition on Mad Men.    She says if there is any chance of them getting back together he must butt out.  Ari tells her if she is  f*cking a waiter they cannot get back together it is embarrassing.   She tells him she is not dating the waiter she is dating Chef Bobby Flay.  She asks him to fix what he did to the waiter.

Ari heads over to his staff and tells them Bobby Flay is now his sworn enemy.  Over at the hotel Turtle is leaving another message for Alex.   They are all picking on Eric and Vince tells them to leave him alone.

The phone rings and it is Sloan she apologizes for leaving.   He says he feels he should buy her dinner.  She says she feels like she needed closure.  She tells him she quit her job because she is moving to New York City and he tells her good luck.  She says maybe they will talk again soon and Eric hangs up.  He walks out of the room clearly upset.

Drama has the classic line, ‘Poor guy he must f*ck like dog sh*t’ and the show is over for the night!