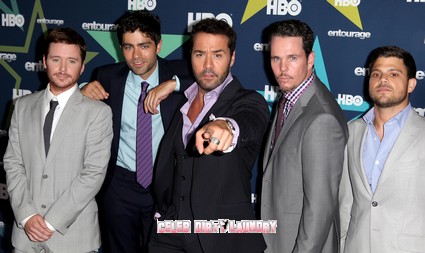 Kevin Connolly, Adrian Grenier, Jeremy Piven, Kevin Dillon and Jerry Ferrara final season premiere of HBO’s ‘Entourage’ held at Beacon Theatre in New York City today July 19th, 2011.  Entourage is set to kick off the finale season this Sunday on HBO, but the filming was finished a while ago.]

There have been rumors that once the show is over they maybe a movie in the future of Entourage.  There is no confirmation yet but all the guys are excited about doing it.  Kevin Connolly said today: “We are going to try hard to make that happen.”

The final season is expected to be lighter than the last one and feature plenty of famous guest stars.  Will you be tuning in for Season 8? I know I will be!

Click on the thumbnails below to see 10+ more pictures!