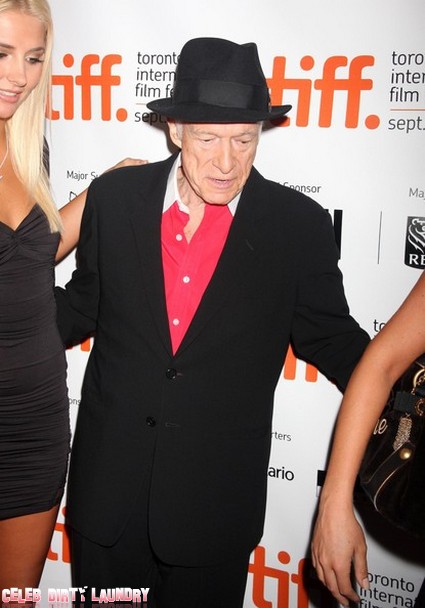 After two divorces and a runaway bride, 85-year-old Playboy founder and CEO, Hugh Hefner is making a New Year’s resolution to say NO to marriage.  At this time last year, Hef was excitedly celebrating his proposal to 24-year-old blow up doll look-alike Crystal Harris. However, it wasn’t meant to be as Harris got cold feed and abandoned Hef just five days before their June wedding.

Today, Hefner told People Magazine that he’s glad he and Harris did not go through with the nuptials and considers the scandal a sign from a higher power. Hef revealed that his former girlfriend, Holly Madison, recently told him he’d dodged a bullet with Harris and, according to Hef, she couldn’t be more right. “I think that’s accurate. I am clearly not meant to be married. Married life isn’t for me.”

Months later, Hefner is still dealing with the fall out from the engagement. He and his ex-fiancé exchanged blows on twitter earlier this week when Hefner commented that Harris was trying to take his Terrier puppy. Hefner wrote via twitter: “I told Crystal she could keep the engagement ring & Bentley (a wedding gift) if I could have our puppy. But now she wants all three.”

Two of Hef’s former girlfriends came to his defense shortly after his tweet. Kendra Wilkinson wrote “@hughhefner I’m sorry u have to go through this. That dog loves u so much. She abandoned him n now she want him back. She’s mean mean mean.” Holly Madison later chimed in by saying “I agree!!! I’m so glad you said something, Kendra!!”

Harris claims she didn’t get any of the things Hef noted in the tweet, but sources say she sold the engagement ring months ago.  Hefner is currently dating Shera Berchard and Anna Berglund but is adamant that there will be no future trips down the aisle.