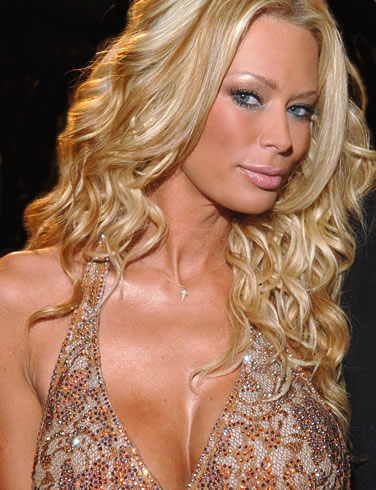 Jenna was ticked off about an interview Chelsea did this past December with Katie Couric For Glamour.  During the interview Chelsea said “I don’t like the word raunchy. I’m irreverent and I say things that a lot of people wouldn’t say, and some of it probably isn’t in the best taste, but when I hear the word raunchy, to me that describes Jenna Jameson. Look, I’m never going to please everybody.”   Chelsea also joked about children with Katie.

This seems to be the basis for Jenna’s tweets:

“Chelsea handler makes fun of peoples kids… Probably because she’s a dried up old whore.”  Adding “just cuz I say it like it is…… Don’t hate…… She talks massive shit.. Ok, whatever….”

“I think talking about children and their looks is not nice. Like, unattractive children. I don’t do that. And I don’t talk about people who are dying. I think that’s inappropriate.”

Chelsea better hope that Jenna doesn’t get the father of her twins, USC star Tito Ortiz, to give her the beat down.