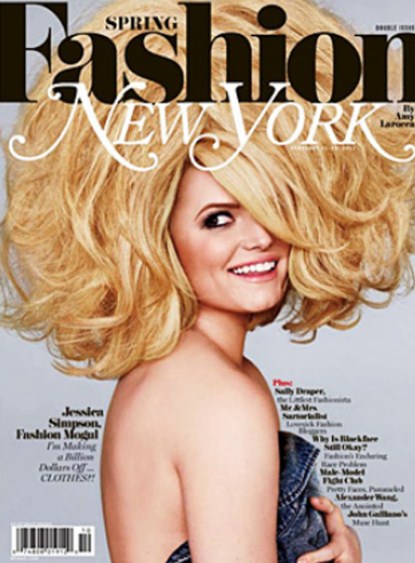 Fashion mogul Jessica Simpson, 30, and her crazy teased big hair rock the cover of the Spring issue of New York Magazine.  Although Jessica is a singer and an actress those careers come second to her new career as a fashion designer.  It was recently announced that Jessica is now a billionaire.  Jessica’s fashion empire will take in more than $1 billion in 2011.   Jessica’s fashion empire is growing at an amazing rate.  As a matter of fact she has increased by 25% over 2010.  Jessica is now in the league of Michael Kors and other more established fashion designers.

Jessica also dishes about her fiancé in the magazine.  She says “Was it love at first sight?  No. I don’t know if I believe in that. But it was definitely I could love this man. And maybe I already do.”

Johnson is inspiring Simpson, in a New Age–y sort of way. Together they follow the “Artist’s Way” practice of writing down their thoughts free form for an hour each morning. “I just let it flow,” she says. “My fiancé taught me that. He’ll get up in the morning and just write, so nothing blocks his emotional life. It doesn’t even have to be in sentence form; he just gets everything out, and that way he can function without getting in the way of himself, without being aggressive or judgmental. We do that together. Sometimes he takes that hour just reading, we’ll get out of bed and just read aloud to each other. He has so many books. Like, just books and books and books and books.”