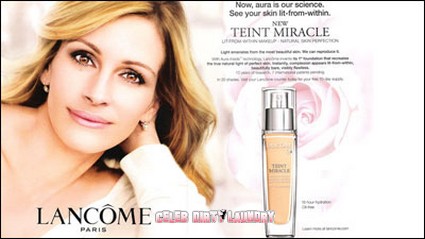 A cosmetics ad featuring Julia Roberts has been banned in the United Kingdom by officials after a politician complained about the amount of airbrushing used on the image.

Julia Roberts will be 45 years-old shortly and although she looks really good what she does not look like is a 20 year-old with flawless skin. But the advertising people tried to trick the public into thinking that perfect skin can be had by using the product they are flogging.

Liberal Democrat Member of Parliament, Jo Swinson, complained the commercial gave a “false impression of beauty” due to the amount of airbrushing used to complete the look.

The ad in question features Julia appearing in a campaign for Teint Miracle foundation by Lancome, which is owned by L’Oreal.

Julia is seen digitally altered with flawless skin and youthful looks, with the company claiming the product “recreates the aura of perfect skin.”  Now authorities at the Advertising Standards Authority have pulled the ads in Britain after branding the images misleading.

Its pathetic that women are made to feel that age makes them less lovely but to be urged to live up to a totally fake, digitally altered image, is really too much. Good for the Advertising Standards Authority.