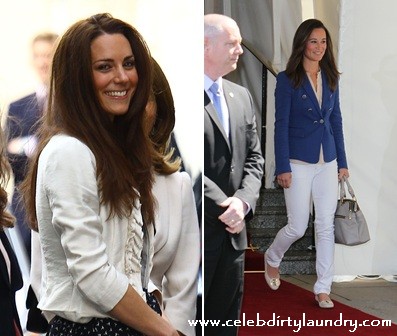 Not terribly used to being the subject of paparazzi the family of Kate Middleton got creamed by two Sunday papers yesterday.  They published pictures of Kate and Pippa Middleton in the company of their mother, Carole, and Prince William aboard a yacht moored off Ibiza.   These pics were taken in 2006.

The seven photographs, published across two pages of the Mail On Sunday under the headline Perfect Pippa – and the Prince of Belly Flops showed the sisters, both wearing bikinis, while swimming, diving and sun-bathing.   Their mother was also shown in a bikini.

The News of The World carried two shots from the same set on its front page with the headline “Oh buoy it’s Pippa… and she’s topless inside.”

There were six pictures on an inside spread – headlined “So hot she had to be hosed down!” – with one showing Pippa in the act of removing her bikini top.   Could this photo have promoted US owned Vivid Entertainment to offer Pippa $5,000,000 to film one pornographic scene?

It also urged readers to visit its website to “see more photos of Pippa sunbathing.” These were available for a time (there were links to them from Google and Facebook) but have since been taken down. The story has also been removed from the paper’s site.

Why? Well, it could have something to do with the paper becoming aware of the fact that the Middleton family are very likely to make a formal complaint to the Press Complaints Commission about the use of the pictures.

They are expected to argue that publication of these five-year-old images breaches the editor’s code of practice by invading the privacy of the Middleton daughters and their mother.

As a family enjoying a holiday aboard a private yacht moored in a discreet location off a foreign island they had “a reasonable expectation of privacy.”

Then there will be questions about how the pictures were obtained. For example, did the photographer (or photographers) engage in “persistent pursuit” in order to shoot them?

Over the years, it’s possible that lots of candid paparazzi shots of Kate Middleton and her family were taken and never published, but they are held on file.

The family probably feel that they need to deal with this matter rapidly in order to prevent yet more pictures from emerging.

There were also up-to-date pictures of Kate (aka the Duchess of Cambridge) published in the three best-selling tabloids last Friday. They showed her pushing a shopping trolley outside a Waitrose supermarket in Anglesey.

Nothing can be worse than the paparazzi harassment of Diana but I’m sure these vultures will do their best.