Kim Kardashian Breaks Down In Crocodile Tears On TV (Video) 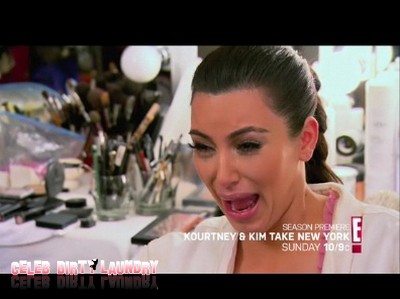 Kim Kardashain manages to break down in tears over cruel Kris Humphries in the premiere episode of ‘Kourtney and Kim Take New York – Season 3.’ Just what we expect to see as Kim and momager Kris Jenner attempt to rebuild Kim’s reputation. It is clear that Kim and her nasty Klan will now be using their reality shows to bash Humphries in order to try to justify Kim’s unpopular and apparently impetuous divorce decision. Poor Humphries will be made to look a monster – but we don’t buy it – since it is Kim’s side who control exactly what we see and hear.

Kim has kept her feelings and herself largely out of the spotlight since public opinion has recoiled against her. But in the new episode Kourtney & Kim Take New York, she sobs bitterly as she talks about her marriage.

Speaking to her sister Kourtney, Kim cries uncontrollably as she says, “He fell in love with me and I fell in love with him and now my feelings have changed … And I failed at this. You don’t think I feel bad?”

Another scene, released online, shows Kim in an argument with Humphries as they talk about whether to live in his home state of Minnesota.

Kim says, “How am I going to have my career and live in Minnesota?” while Humphries replies, “Maybe by the time you have kids, no one will probably care about you.”

To cap off the anti-Humphries campaign he is shown earlier in the episode drinking alcohol from a bottle. Funny though, they don’t show Kim releasing her sex tape… which is how she shot to fame in the first place.

This is all a contrived and desperate attempt to win back some favor for the Kardashian brand and rating points for her family’s stable of reality shows – lost as a consequence of Kim’s following up her excessively extravagant wedding by her impetuous decision to divorce Humphries after only 72 days of marriage.

The Kardashian brand is in serious trouble as the ‘No More Kardashian’ movement is calling for a total boycott of all things Kardashian and has 170,000 signatures to date.

Since the end of her 72-day marriage and surprise divorce attack on unsuspecting Humphries, the Kardashian mean machine has gone into damage control mode. This means that we get to see Kim dishing out Thanksgiving meals to the homeless and crying over ‘loving’ Kris – all in a pathetic attempt to win sympathy from her FORMER fans.

Do you think that Kim Kardashian is a nice person? Do you think Kim is a money-hungry fame-whore without a shred of decency?   Please let us know your opinion in the comments below.