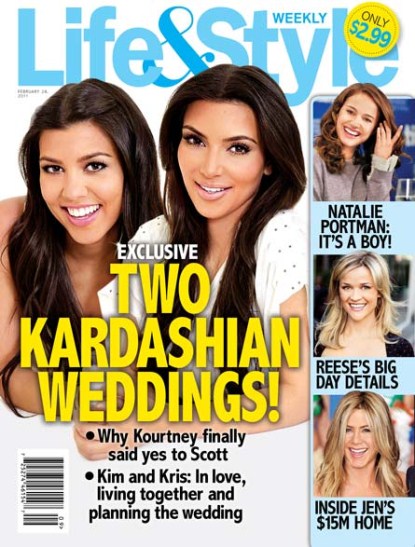 On the season finale of Kourtney and Kim take New York it is believe that Scott Disick will propose to Kourtney Kardashian, 31.    The couple are apparently in talks to get their own reality show that will be  surrounded around the wedding plans.

The plans come after Kourtney’s other sister Khloe has signed to star in her own show revolving around her life with her husband Lamar Odom.

Life & Style has the scoop:

“The season finale, which has already been filmed, ends with Scott proposing and Kourtney accepting,” an insider close to Kourtney tells Life & Style, confirming that the once rocky couple is officially engaged. “It’s been really hard for them to keep it quiet. She’s so excited for the finale to air this April so she can finally go out in public with her ring on. She wears it at home all the time.”

The Kardashian clan has finally warmed up to Scott, accepting him into their close-knit crew, but don’t expect them to spill Kourt’s exciting news anytime soon. “The family is really happy about Scott and Kourtney’s engagement but they’re trying to keep it a secret so it’s a huge surprise on the show,” a second insider tells Life & Style.

Kourtney and Scott’s son, Mason Dash Disick, was born on December 14, 2009. Congrats to the couple!